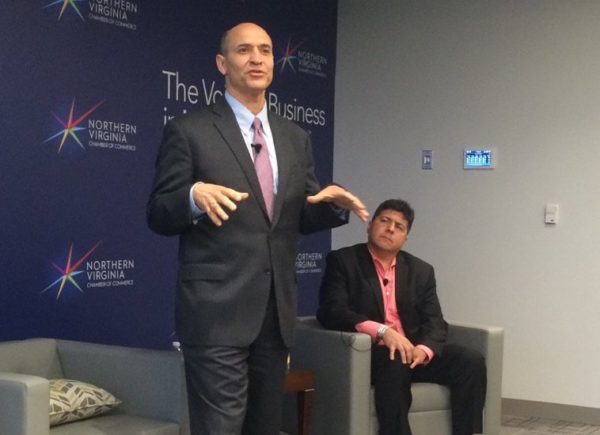 After helping convince Amazon to bring 25,000 jobs to Arlington, Victor Hoskins could probably be forgiven for looking for his next challenge.

The county’s top economic development official has already bounced around the Washington region a bit over the course of his career, serving in similar roles in D.C., Prince George’s County and even Maryland’s state government. But few of the deals Hoskins struck in those jobs could hope to rival the agreement he worked to forge with Amazon, in terms of both size and controversy.

Accordingly, it might seem perfectly reasonable if Hoskins wanted to walk away from the county after pulling off such a mammoth transaction — or perhaps parlay his Amazon-sized success into a bigger payday elsewhere.

But even with Jeff Bezos and company set to head to Arlington, Hoskins says he isn’t going anywhere. Though the tech giant plans to invest billions in the county, he believes there are still plenty of challenges left in Arlington that he hopes to tackle.

“Frankly, I want to see this through,” Hoskins told ARLnow. “This is a once in a lifetime opportunity… because we still have an 18 percent office vacancy rate. When we get down to a 10 or 12 percent vacancy rate, then I’ll consider leaving.”

Like many other county officials in recent weeks, Hoskins emphasizes that the 25,000 workers Amazon plans to move to Crystal City and Pentagon City will only help replace the similar number of employees who’ve left the area in recent years, as federal agencies and the military have headed elsewhere.

That means he sees plenty of room for Arlington to keep adding jobs, and he fully expects that the county’s economic development arm will have a key role in guiding that process.

“We’re expecting 25,000 jobs of Amazon, but at least another 25,000 over the same 10-, 12-year time period from all the supportive services or ancillary services to the company,” Hoskins said. “That means a few years from now, we could be down to a 12 percent office vacancy rate if everything goes right. But that takes hard work.”

Hoskins says it certainly helps to have a “seal of approval from the largest tech company in the world” in bringing in other high-tech businesses too. Though he’s waiting until the county and state formally sign off on the Amazon deal — a process that could wrap up as soon as February — to start courting anyone too hard, Hoskins would also concede that luring other Silicon Valley firms will be a key part of his strategy going forward.

“We’re going to be looking for companies that start deciding, like Amazon, that they need an eastern seaboard location,” Hoskins said. “And many of those are west of the Mississippi.”

He envisions branding Arlington as the next Silicon Valley, perhaps “the Silicon Valley on the Potomac,” a shift in thinking that he believes the county kicked off years ago that contributed to its successful courtship of Amazon. Part of that work will be marketing Arlington’s ever-growing tech workforce, another key piece of the pitch county and state officials made to Amazon.

For instance, Hoskins expects that the state’s investments in new, tech-focused higher education efforts in the area (including a new Virginia Tech “Innovation Campus” in Alexandria and a beefed up computer science program at George Mason’s Virginia Square campus) will send tens of thousands of graduates with high-tech degrees into the workforce in the coming years. And he hopes that other local universities will follow that lead, even if they weren’t included in the Amazon deal.

“UVA’s [Darden School of Business] opened up an MBA campus right in Rosslyn, and I know they’re probably sitting there thinking, ‘Could we raise some money in the tech arena and build on some state funds here?'” Hoskins said. “And I think we have a whole host of other universities that will come on board.”

Of course, the quality of Arlington’s public schools were another factor that lured Amazon to the county, and Hoskins expects school officials to play a role in readying students to potentially enroll in those programs.

“I know our schools are already having conversations with George Mason University and others to see what kind of cross-training they can set up to take advantage of these resources,” Hoskins said.

Yet Hoskins says that his intense focus on the future doesn’t take away the pride he feels in having helped pull off such a massive deal in Arlington. Though community concerns abound about the tech giant’s potential impact on everything from the housing market to traffic, Hoskins believes the positives for the county were enough to leave him practically giddy when he first heard the news that Amazon tabbed Arlington.

“I was exhilarated, are you kidding me?” Hoskins said. “It was 14 months of pins and needles… I’ve got a 91-year-old mother, and she told me she was delighted to hear about this. And it took her a long time to even understand what I do for a living, so that means the world.”