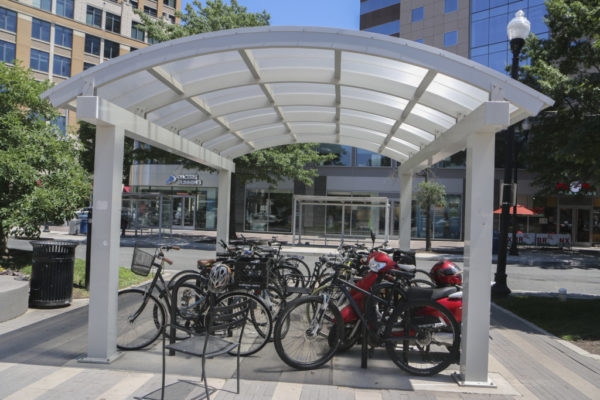 WMATA announced today (Wednesday) that it will no longer prohibit cyclists from using its trains from 7-10 a.m. and 4-7 p.m. each weekday. The change will officially go into effect on Monday (Jan. 7).

Metro said in a news release that it was making the change in a bid to boost ridership, an increasingly challenging feat for the transit service these days, particularly for people hoping to commute via a combination of Metro and local bike trails.

“We believe this change supports ridership growth by Metro a commuting option for those who want to have a bike with them,” Metro Chief Operating Officer Joe Leader wrote in a statement.

Officials added that they expect they’ll be able to make the change “without significant negative effects” on conditions for rush-hour riders. That’s because many trains at rush hour are eight cars long, the longest offering in the Metro fleet, and because the “new 7000-series trains provide more open space.”

Local cycling advocates have long sought such a change, dating back to when Metro first instituted the current rush-hour bike ban in 2001. WMATA initially banned all bikes on its trains, before instituting a permit system in 1982. Those were eliminated in 1998.

“Bicycling extends the reach of Metrorail for customers at the beginning and end of their trip. Members of the community have long wanted the option to bring a bicycle along with them on their rush hour trips, especially reverse commuters,” Greg Billing, the executive director of the Washington Area Bicyclist Association, wrote in a statement. “I have to say that we’re pleasantly surprised with how flexible and accommodating Metro has been in responding quickly to this request.”

Of course, early reaction to the policy change has been anything but unanimously positive, over fears that the move will exacerbate crowded conditions on trains for commuters.

I bike, and this is a bad idea. The trains are waaaaay too crowded for this to work. Also, bikes can really only fit in the open spaces by the doors, which coincidentally are really the only spaces customers in wheel chairs can maneuver. https://t.co/obvHSSTTPN

Metro added in the release that officials plan to “monitor implementation of the new policy to determine whether any modifications are necessary,” and it could still ban bikes during “major events drawing high ridership” like Independence Day or Inauguration Day.

WMATA estimates that just .8 percent of its customers arrived at stations by bike as of 2016, and its governing Board of Directors is aiming to increase that figure to 2.1 percent by 2020.