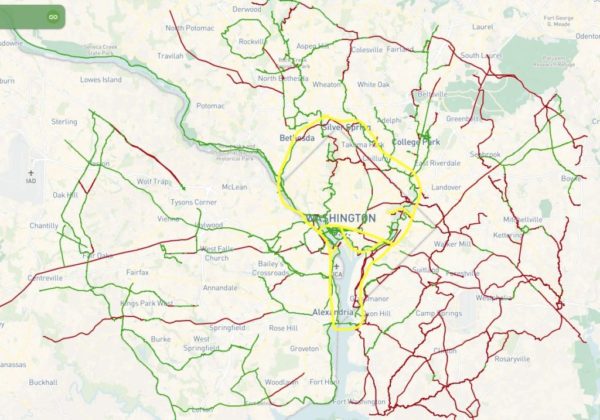 Transportation planners are sketching out a vision to build out a fully connected regional bike trail network by 2045, linking a “Bike Beltway” around D.C. to the rest of the suburbs surrounding the capital.

The Metropolitan Washington Council of Governments’ Transportation Planning Board voted late last month to endorse a vision for a “National Capital Regional Trail Network,” expanding its long-range plans for cycling infrastructure throughout the region. Though the actual funding and construction of the trails involved remains up to the individual localities, the map represents a potential path forward for the D.C. area’s elected officials to follow in the coming years.

The newly adopted trail network includes the 842 miles of bike paths identified by the Capital Trails Coalition, a group of both local government transportation agencies and a host of advocacy organizations, as ones that regional leaders should pursue to make cycling around the area a bit easier.

The group has been pushing the idea of a more interconnected region for years now, particularly the “Bike Beltway” circling the city. Former Arlington County Board member Jay Fisette was a key backer of the concept, envisioning a loop of trails from the county’s border with D.C. down to Alexandria, then running around the city into its Maryland suburbs.

But with that trail nearly finished, this latest move envisions connecting that “Beltway” with trails in more far-flung jurisdictions, like Prince William and Loudoun counties.

“The Capital Trails Coalition is pleased to see the coalition’s two years of research and mapping make its way into this important regional transportation plan,” Coalition Chair Jack Koczela wrote in a statement.

The National Park Service has embraced the plan as well, and regional planners hope this latest move can help all the jurisdictions involved in crafting the trail network secure funding to make it a reality.

“There has been great interest among the region’s jurisdictions, agencies, and advocacy groups to build on the National Capital Trail, as endorsed by the TPB and adopted by the NPS,” the Transportation Planning Board’s staff wrote in a blog post.

Arlington officials are currently working on their own update of the county’s guiding documents for future cycling infrastructure improvements, set to wrap up in the coming months. The county’s budget squeeze, however, will make it a challenge for the Board to find finding for many bike projects, at least in the near term.