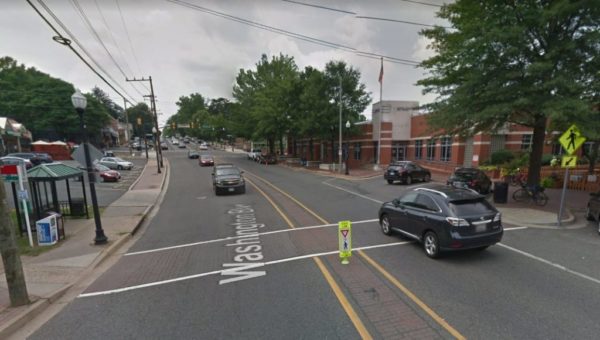 (Updated at 11:30 a.m.) Washington Blvd is about to get a bit of a makeover as it runs between Bluemont and Westover, and county officials are looking for some input on potential changes for the area.

VDOT is planning on repaving the road between its intersection with N. Frederick Street and N. McKinley Road later this summer.

As part of that process, workers expect they’ll remove the brick crosswalks and median in the Westover area, as the road runs between N. McKinley Road and N. Longfellow Street. The county is currently working to replace all of its so-called “brick pavers” across Arlington in favor of crosswalks that are both easier to maintain and a bit more visible at night.

Accordingly, the county is looking to accept feedback on what sort of road features could replace those and make the area a bit safer for pedestrians and cyclists. Officials are holding an open house tomorrow (Wednesday) at the Westover Branch Library (1644 North McKinley Road) from 6-7:30 p.m. to accept suggestions.

The county is hoping to make it a bit easier to access the library, the nearby Post Office and the area’s popular businesses, like the Westover Beer Garden and the Italian Store.

That should come as good news for some neighbors concerned about pedestrian safety in the area, especially after a driver struck an elderly woman with a car in a Westover crosswalk in November.

The county is also examining some potential improvements as the road runs between Westover and East Falls Church, including some new bike lanes, additional pedestrian crossings and clearer markings for existing crossings.

Officials are also planning on holding a “pop-up” engagement session at the Westover Farmer’s Market in the library plaza Sunday (March 3) if you can’t make this week’s meeting. Starting later this week, the county will also accept online comments through the end of March on its website.