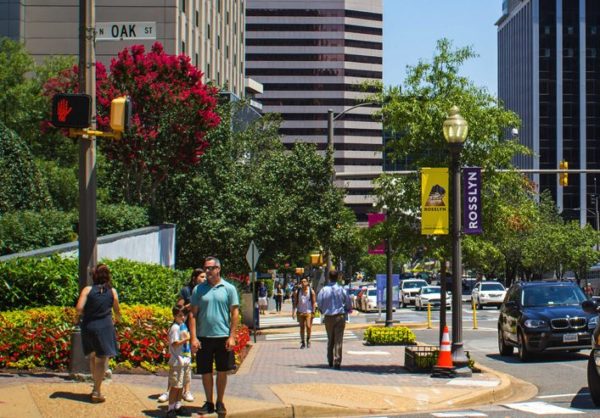 Rosslyn is set to see a few more pedestrian safety improvement over the course of the next year or so.

The neighborhood’s Business Improvement District, which advocates for Rosslyn businesses by collecting a small property tax, is planning a variety of short-term fixes to make the bustling streets a bit safer for walkers.

In plans delivered to the County Board Saturday (Feb. 23), the BID says it hopes to use some of its tax revenue to work with county police on the fixes, as part of a broader initiative to make the area more walkable. County officials have even contemplated the more drastic step of make certain roads in Rosslyn “car-free,” though they have yet to settle on a precise strategy for the neighborhood beyond some guiding principles.

In the short term, the BID plans to build new “crash-grade planters to help delineate safer pedestrian crossings” at several intersections. Many of the roads crossing Wilson Blvd are often the site of robust crowds in the morning and evening rush hours.

The BID also hopes to expand some of its “wayfinding” efforts “that will eventually encompass not only pedestrian signs, but also traffic signage” to better brand each section of Rosslyn. The BID has already done some work in that department, setting up area maps, and even rolling out efforts to improve green space in the area, including the county’s first “parklet.”

In the long term, the BID plans to continue to work on efforts to someday convert streets like N. Fort Myer Drive, N. Lynn Street and N. Kent Street into two-way roads, though those changes are still a ways off.

Other, more ambitious efforts could someday remove the Fort Myer Drive tunnel under Wilson Blvd, or replace the existing Rosslyn skywalk system in favor of an all-pedestrian and cycling corridor leading up to the area’s Metro station. Some new developments in the area could help spur progress on the latter effort.

But all of these changes won’t be on the way until the new fiscal year, according to the BID’s proposal. The group is also asking the Board to hold its tax rate on local businesses level at $.078, though ever-rising real estate values will send the BID an extra $166,000 in revenue from a year ago.