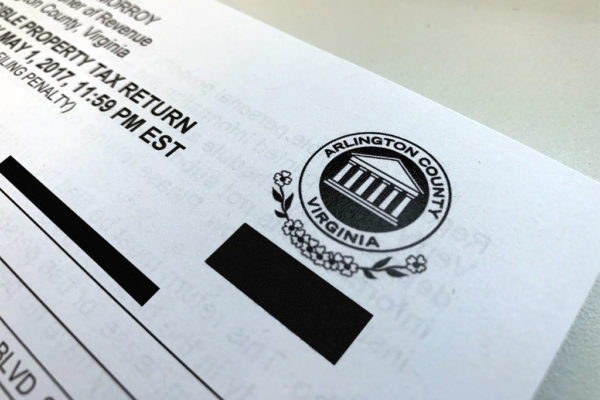 The good news, the county says, is that the total assessed value of all Arlington property increased by 3.5 percent this year, compared to a 2.2 percent bump last year. Today (Friday), county mailed out property assessments, which determine the size of homeowners’ tax burdens. It plans to make all that information available online by tonight at 6 p.m.

The county said in a news release that three out of every four homes saw an increase in assessed value, for an overall bump in residential property values of about 2.9 percent. The average home’s value is now $658,600, up from $640,900 last year.

Commercial property also saw a 4.1 percent increase in value, and the county says the construction of new apartments was “responsible for about a third of the collective increase.” Office properties specifically saw a 4.3 percent bump, a substantial turnaround from the 6.9 percent decrease they recorded last year.

“Rising property values mean Arlington is a place people want to live and work,” County Manager Mark Schwartz said in a statement. “And the revenue we collect from real estate taxes helps us maintain the high-quality amenities and public services that make Arlington so attractive.”

Of course, the county still has its challenges. The release notes that Arlington’s office vacancy rate still sits at about 17.4 percent, and the resulting tax revenue slowdown has led to all sorts of fiscal challenges over the last few years.

Amazon’s arrival in Crystal City and Pentagon City will go a long way toward reversing that trend, but county leaders expect that it will take years for Arlington to start to feel the positive revenue impacts.

In the meantime, Schwartz is warning that the county’s budget deficit could be as large as $78 million in fiscal year 2020, given the gap facing both the county and its school system.

Schwartz expects that the county will need to close a gap of anywhere from $20 million to $35 million all on its own, which is driven by factors including Metro’s increasing expenses, the new raises for public safety workers the Board approved in the FY 2019 budget and new spending associated with the statewide Medicaid expansion.

The county school system could also tack on another $43 million in unmet needs, as it works feverishly to build new schools and keep pace with the county’s influx of students.

The County Board has already directed Schwartz to prepare options for the new budget ranging from tax increases to staff layoffs. He’ll deliver a proposal for a new spending plan next month, as will schools Superintendent Patrick Murphy.