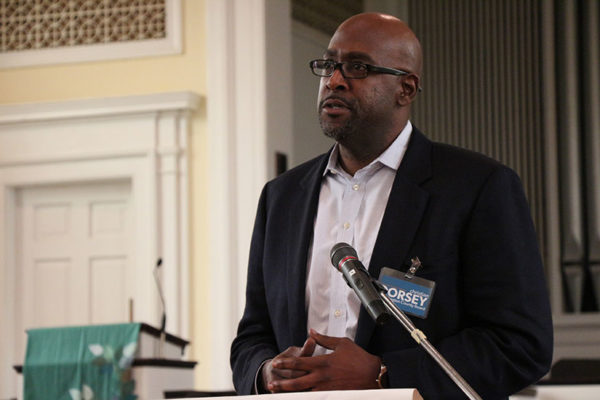 County Board Chair Christian Dorsey is making a run for re-election, joining fellow Board member Katie Cristol in a bid for another four years in office.

Dorsey formally announced his bid at the Arlington County Democratic Committee’s monthly meeting last night (Wednesday), according to the group’s website. The county’s elections office also now lists Dorsey as a candidate for the Board, which has two seats on the ballot this fall.

Dorsey did not immediately respond to a call seeking comment, but he’s telegraphed a run for another term for several weeks now. He held a Super Bowl-themed fundraiser in early February, but held off on formally announcing until now. Cristol, who won office in 2015 alongside Dorsey, announced her re-election bid last month.

The pair won spots on the Board four years ago as relative political newcomers, triumphing in a crowded, six-way caucus to earn the Democratic nomination and then decisively winning in the general. Dorsey had run for county office before, but his background is mainly in work at D.C. think tanks.

Since joining the Board, Dorsey has taken a leading role on transit and housing issues, most notably serving on Metro’s Board of Directors. He rotated in for a one-year stint as chair back in January.

Dorsey and Cristol have since helped steer the Board through several tough budget years, as persistently high office vacancy rates have strained county coffers, and also been tasked with navigating the complexities of bringing Amazon to Arlington, and the resulting debate over the deal.

As of yet, however, no other Democrats have stepped forward to challenge the pair in a June 11 primary. Democratic Committee Chair Jill Caiazzo said that other candidates have until March 28 to file for the race, otherwise the party will call off the primary.

“I have not heard of anyone else seeking the Democratic nomination at this point, but there is still time,” she told ARLnow via email.

However, independent (and perennial candidate) Audrey Clement has already announced plans to run for the Board in the general election.

In an off-off-year election, where only local offices and statehouse races will be on the ballot, Cristol and Dorsey could well face a taller task in fending off Vihstadt. De Ferranti was buoyed, in part, by a surge of Democratic voters, eager to send a message to national Republicans in the 2018 midterms.

Favola and Lopez have drawn primary challengers so far; Sullivan and Levine are currently unopposed.