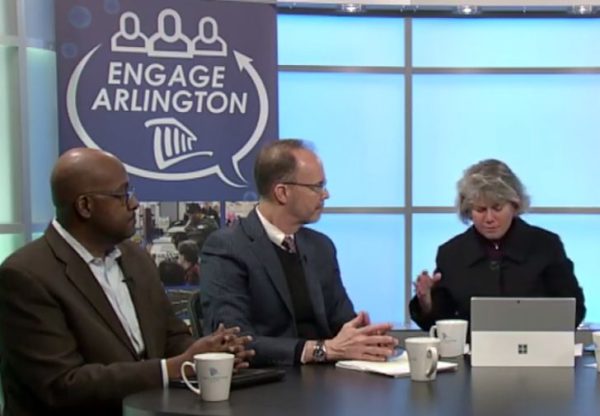 (Updated at 8:25 p.m.) When many Arlingtonians take a look at the sort of impact Amazon has had on Seattle since setting up shop in the city, they can’t help but feel nervous about how the tech giant might transform the county when it arrives.

The city has seen everything from skyrocketing housing prices to nightmarish traffic congestion stemming from Amazon’s rapid growth into one of the largest companies in the world, and leaders there have felt compelled to take new steps to bridge the growing inequality between the city’s tech workers and the rest of its residents.

It all provides plenty of reason to be wary of what lies ahead for Arlington once the company starts bringing its new headquarters to Crystal City and Pentagon City. But local leaders and regional planners are trying to deliver a clear message to quell those concerns — Seattle and D.C. could not possibly be more different.

“A lot of people are influenced by the Seattle example… and they think, ‘We don’t want to end up like that, our problems are already bad,'” County Board Chair Christian Dorsey said during an Amazon discussion yesterday (Wednesday) live-streamed on the county’s Facebook page. “But some of these fundamental economics are very different. I’m not saying we’ll have no problems, but I’m pretty confident we won’t have Seattle’s problems.”

For one thing, it helps that the D.C. region is quite a bit larger than Seattle and its suburbs. Chuck Bean, the executive director of the Metropolitan Washington Council of Governments, estimates that the D.C. metro area is “about 40 percent bigger” than Seattle’s, so there’s “a lot more absorptive capacity” for the workers Amazon will bring here.

It doesn’t hurt either that Bean believes has the region has “an advanced, mature transit system that Seattle didn’t have,” giving people the ability to live a bit further away from the headquarters without necessarily relying on a car.

“Perhaps it’s a bit too mature, but we’re working on that,” Bean said, in a reference to the lengthy efforts by local leaders to get Metro working properly again.

Amazon has pledged to deliver 25,000 new jobs at its new headquarters, but officials have consistently reiterated that only a small portion will likely live in Arlington itself, and many already live elsewhere in the region. The way Dorsey sees it, the county is only likely to see about 20 percent of Amazon’s workers live in Arlington, equivalent to about 5,000 people in all.

In a county of 230,000 people or so and a broader region of millions more, he hopes that such an addition won’t be nearly as disruptive as it was in Seattle. Bean also points out that Amazon’s 25,000 jobs is just a drop in the bucket compared to the 1.1 million jobs his group believes the region will add over the next 20 years.

“Their population grew by 40 percent from when Amazon was founded to about two years ago,” Dorsey said. “That’s a tremendous amount of growth in a short period of time for any community to sustain. They’re not going to have anywhere near that impact, based on that path of growth here.”

Dorsey also notes that Amazon’s employees “earned significantly more than other Seattle workers,” especially when the company was first growing in size. Based on the tech firm’s projections, Dorsey expects that Amazon’s workers will earn “about what the typical higher wage employees in this area already earn” — as a condition of the state’s deal with Amazon, the average salary of the company’s workers needs to be at least $150,000 per year, with that amount increasing each year.

Dorsey acknowledges that there is the chance that adding more wealthy workers will drive up prices around the region, particularly for rent. But Eric Brescia, a member of Arlington’s Citizens Advisory Commission on Housing, says it’s not that simple.

“Intuitively, when you bring more high-income people in, it creates more demand to drive up prices,” Brescia said. “But the price of housing is not only just a function of what the demand is, it’s how does the supply compare to the demand.”

To demonstrate the difference, Brescia drew a comparison between how San Jose managed the explosive growth of Silicon Valley and Charlotte shepherded growth in its financial services sector.

Brescia, an economist for his day job, pointed out that Charlotte has since a 40 percent boost in jobs over the last two decades, while San Jose saw just a 17 percent bump. Nevertheless, home prices in Charlotte only rose by 18 percent in that same period, while they rose by 160 percent in San Jose — adjusted for inflation.

In his mind, the difference comes down to housing production — Charlotte and its suburbs added 400,000 new homes over the last 20 years, while San Jose managed just 100,000.

“This is an illustration that the presence of high-paying jobs does not inherently make housing unaffordable if we’re nimble enough to build housing to accommodate that,” Brescia said. “And I think this region as a whole is really going to have to be thinking of land use policy, transportation policy to determine where these homes are going to go.”

For Dorsey, who once drew headlines for proclaiming that the county should not “protect” certain neighborhoods from density, that illustrates the County Board’s challenge in the coming years.

As more Amazon workers move in, Dorsey expects that officials will need to do something to confront that trend and avoid “inefficient sprawl.”

“Our community has to embrace a conversation about what it really means to grow the supply,” Dorsey said. “Our community in Arlington, and our region in general, devotes a lot of its housing to one house per lot. And if we think about equitable growth, growth that’s diverse and inclusive, that can’t be the sole way we do it.”

That could mean everything from expanding the county’s previous efforts to allow more “accessory dwelling units” on single-family lots, or encouraging the redevelopment of some single-family homes into duplexes.

But Dorsey also admitted that some more drastic changes could be necessary in terms of increasing density throughout the county. If officials don’t embrace that mindset, Brescia fears Arlington could wind up facing some of those Seattle-sized problems it hopes to avoid.

“If some more flexibility isn’t gradually allowed in more regions of the county, we’re increasingly going to be single-family neighborhoods with $2 million dollar homes versus people in very small apartments near the transit corridors, and really nothing in between,” Brescia said. “Some people get scared when you talk about those things, but the question is how to gradually grow so you don’t have that divide.”