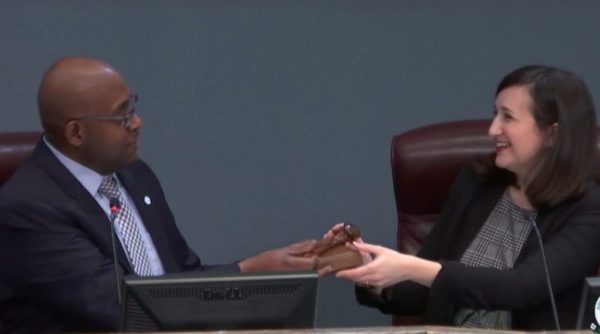 With newly reshuffled leadership on the Arlington County Board, local officials are pledging a focus on equity as Amazon arrives this year, particularly when it comes to housing in the county.

But the meeting still represented a major turning of the page in the county. Not only was the gathering the Board’s first since Matt de Ferranti’s swearing in, returning the Board to unified Democratic control for the first time since 2014, but it was a chance for Board members to sketch out a vision for how they plan to confront what looks to be a difficult year.

Naturally, Amazon proved to be the elephant in the room as officials delivered their annual New Year’s remarks. In kicking off the Board speeches, Dorsey framed his upcoming year-long chairmanship as one that will have “an emphasis on equity,” especially when it comes time to “expertly manage” Amazon’s growth.

Dorsey noted right away that he’s “only the third person who looks like me to ever serve as chair” of the Board — he joins Charles Monroe and William Newman, now the chief judge of Arlington Circuit Court, as the only black men to hold the gavel in the county’s history.

Accordingly, he said that history will guide his focus on “ensuring that Amazon’s gradual growth here benefits our entire community,” especially as the county prepares to confront some tough budget years while it awaits a projected revenue boom from the tech giant’s presence.

“Taken together, budget gaps today, and significant investment and commercial growth in the near term, present us with the dual responsibility of ensuring that today’s austerity doesn’t disproportionately burden the marginalized and most vulnerable, and that better times don’t leave those same people behind,” Dorsey said.

Board members agreed that a key area focus for leaders on that front will have to be changes to the county’s zoning code, as officials work to allow different types of reasonably priced homes to proliferate around Arlington. Cristol and Board member Erik Gutshall both praised the Board’s past work on housing conservation districts as a good first step, but both emphasized that the county needs to do more to meet its own goals for creating new affordable homes each year.

“Amazon’s arrival has focused our community energy on protecting our middle class from being priced out permanently,” Cristol said. “We can’t squander the opportunity to tackle this hard and important zoning reform work in the year ahead.”

De Ferranti agreed that the county should be fighting for a “significant public and private investment in affordable homeownership and rental housing” as it finalizes its incentive package to bring Amazon to Arlington.

But he and Gutshall also emphasized that a commitment to environmental equity should guide the county’s negotiations with Amazon, arguing that officials should work with the tech company to ensure its new campus in Crystal City and Pentagon City is “net-zero energy,” meaning that Amazon’s buildings generate as much energy as they consume. Gutshall even went a step further, proposing that the county join the growing calls for a “Green New Deal” from some of the newest Democrats heading to Congress, arguing that the “trade-off between the environment or the economy is a false one.”

Yet Board members pledged to keep a more local focus as well, particularly when it comes to Amazon’s impacts on the county’s already crowded classrooms.

Officials are hopeful that county schools will able to handle the gradual arrival of Amazon employees and their families, but Gutshall and Cristol both called for renewed long-range planning efforts for new school buildings.

De Ferranti was even more specific, saying the Board should build future budgets to “put the county in a position to fund the building of another high school” — the School Board is currently in the midst of hashing out plans for new high school seats at the Arlington Career Center, but whether or not that facility will provide the equivalent of a fourth comprehensive high school for county students remains an open question.

Through all of these difficult discussions, however, Garvey urged everyone — from local officials to activists — to strike embrace “civility.” The year-long debate over Amazon has already promoted plenty of tense meetings and raised voices, and the new vice chair argued that “Arlington Way has gotten rather frayed around the edges” in recent months.

“People sometimes jump to the assumption that intent is nefarious, or are all too quick to take offense when no offense was intended,” Garvey said. “We have to set some basic standards, and then follow through by not allowing people to violate those standards and stay in the discussion, or at least not to dominate the discussion so that everyone else decides to leave.”