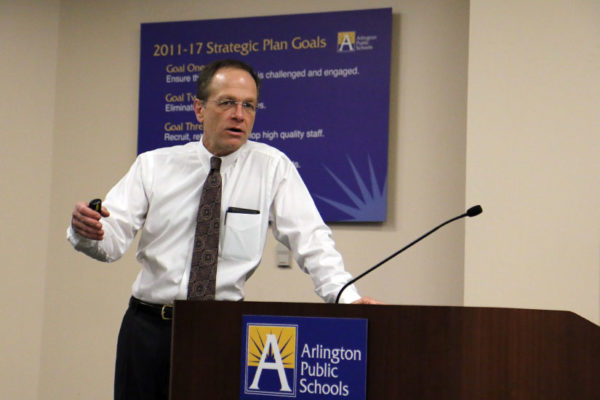 Arlington schools aren’t adding quite as many students as they used to, and that’s quite good news indeed for officials bracing for an influx of Amazon workers and their families.

Arlington Public School leaders are still worried about just how much the company and its 25,000 workers will strain local schools, of course. The school system is already trying to build new schools fast enough to match the enrollment surge Arlington saw over the last decade, and that’s before Amazon brings 25,000 employees to Crystal City and Pentagon City.

But Superintendent Patrick Murphy believes there’s light at the end of the tunnel for the school system, giving him hope that the tech giant’s arrival won’t be hugely disruptive for Arlington classrooms over the coming years.

“Based on what we’re seeing, we’re not going to continue at the pace of enrollment growth we’ve experienced here in the last 10 years,” Murphy said during an Amazon question-and-answer session livestreamed on Facebook yesterday (Wednesday). “I think this will work. But we are going to have to make some adjustments and pay attention to it.”

APS has added an average about 800 students per year over the last five years, school statistics show.

But the county’s school enrollment only increased by 578 students between the 2016-17 and 2017-18 school years, and rose by 556 students between the 2017-18 school year and the current year. The school system’s 10-year projections also estimate that Arlington schools will add closer to 500 to 600 students per year over the next decade, with the number generally falling annually.

With Amazon on board, Murphy says that his staff’s early estimates suggest that the company will only add between 73 and 98 students to APS each year, considering that Amazon plans to only bring workers to the area over a period of 12 years. The company plans to move just a few hundred employees to its new headquarters next year, then add between 1,500 and 2,000 workers each year through 2030.

That means each county school may only see an additional two to three students join their classrooms annually, officials say, making the change a gradual one. Murphy expects that schools closest to the freshly dubbed “National Landing” area will feel the greatest impact, but he added there’s no “nice, neat and tidy” way to estimate the exact impacts this far out.

Murphy also reiterated the oft-cited statistic that only 15 to 20 percent of Amazon’s employees are likely to settle in Arlington, based on the county’s experience with other large companies in the past.

However, county officials hope that Amazon will bring along a string of associated businesses, and even help Arlington attract other tech firms on its own, so Jeff Bezos’ employees aren’t the only ones who will arrive in the county in the coming years.

But, once again, leaders stressed that the entire D.C. region, and its schools, will share the burden of absorbing the new arrivals.

“When you bring a company like this in, it ends up supporting other businesses… but they won’t all locate here,” said Victor Hoskins, head of Arlington Economic Development. “Some in alexandria, some in D.C., some in Fairfax County, some in Prince William. Some will be further out, some will be closer in.”

Murphy and Hoskins are both optimistic that Amazon will bring plenty of benefits to local schools as well. Not only do they envision the school system building stronger, tech education-centric partnerships with Arlington universities to meet Amazon’s demand for skilled workers, but they expect the increased tax revenue the company generates will redound to the benefit of county schools.

It will likely take a few budget cycles before Arlington officials start to see any sort of Amazon effect in the county’s coffers (making the next few years a bit unpleasant, in the meantime).

Yet as the company and its employees move in, Murphy hopes the added tax dollars not only funds the construction of more schools, but can also kickstart the expansion of Arlington’s pre-K offerings.

“A rising tide lifts all boats, and I really want that conversation to gain some momentum,” Murphy said.