A new cafe, restaurant and live music venue called “The Renegade” is hoping to open later this month in the former Mister Days space in Clarendon.

Renegade is “eyeing a late October opening” in the 5,500-square foot space that once housed the popular nightlife destination before it closed in April. The new business is run by chef Patrick Crump, who formerly worked at Clarendon Ballroom, Spider Kelly’s and the now-closed Clarendon Grill, and before that cooked at the famed Inn at Little Washington.

“A renegade is someone who rejects the conventional, and I think the neighborhood is ready for something new and different,” Crump said in a statement today (Friday) of his latest, ambitious venture. 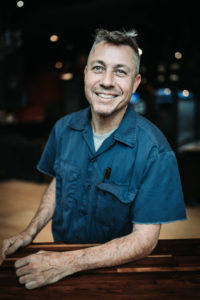 The chef said today (Friday) that his new restaurant at 3100 Clarendon Blvd aims to offer “something different than you traditional wings and nachos” when it comes to the rest of the menu.

The menu itself is set to include an dizzying array of international “stackable bites, skewers, bowls, and housemate dips” from crispy Korean chicken with a moo shu pancake to fried yucca and jalapeño aioli. Other items will be developed from Vietnamese, Thai, Egyptian, and Malaysian cuisine.

Each small dish is expected to cost between $3-5 to encourage patrons to sample several.

“I want spicy, crunchy, bright, and tart. High heat, bold flavors, and something that really grabs you from the first bite,” Crump said.

Pairing with that will be “bright, crisp rosés, rieslings, and sauvignon blancs” on Renegade’s wine list. The bar will also have 12 local craft brews on tap.

Crump previously told ARLnow about his plans to offer Stumptown Coffee, with taps along the coffee bar to serve nitro cold brew coffee.

The Portland-based coffee may be rare in the D.C., but including a coffee bar also puts Renegade in competition with a Peet’s Coffee across the street, as well as Clarendon’s other coffee mainstays: Northside Social, Starbucks, Waterhouse Coffee, Bakeshop, Oby Lee, Detour Coffee, Dunkin Donuts, Heritage Brewing, and the future East West Cafe and Kaldi’s Social House.

Renegade, which Crump originally called “The Grill on Highland,” also aims to book weekly bands for live music on its 20-foot stage. The chef said he hoped to fill the hole left by longtime music cafe IOTA’s closure two years ago.

More from a press release, after the jump.

The Renegade, a new full-service coffee shop, restaurant, and live music venue from Clarendon Ballroom chef Patrick Crump is coming to the former Mister Days space located at 3100 Clarendon Blvd. in Arlington, VA. Renovations of the two-story space are nearing completion, and the team is eyeing a late October opening.

“This definitely won’t be your traditional bar and grill,” Crump said. “A renegade is someone who rejects the conventional, and I think the neighborhood is ready for something new and different.”

“Anyone who knows me walks in and says, yep, this is Patrick’s place,” Crump said. “It’s really a reflection of my personal style and my passions.”

Crump has been a fixture in the Clarendon dining scene for more than two decades and is well-known in the neighborhood. He’s currently the executive chef at Clarendon Ballroom, and consulted on the menu and kitchen operations at the Clarendon Grill, Eventide, and Spider Kelly’s. Before Crump settled in Arlington, he cooked at the Michelin three-starred The Inn at Little Washington and the lauded Ashby Inn in Paris, VA.

While Crump is classically trained with a background in fine dining, his vision for The Renegade takes a more eclectic approach.

“I love in-your-face food,” Crump said. “I want spicy, crunchy, bright, and tart. High heat, bold flavors, and something that really grabs you from the first bite.”

Crump’s menu is comprised of snackable bites, skewers, bowls, and housemade dips. A majority of the dishes are priced at $3 to $5 each so diners can sample flavors from the many different countries represented on the menu. The rotating selections will feature specialties from Vietnam, Thailand, Egypt, Mexico, Malaysia, and more. Highlights from the opening menu include Lemongrass Beef with crushed peanuts and crispy shallots, Crispy Korean Chicken with spicy gochujang BBQ sauce and moo shu pancake, and Fried Yucca with jalapeno aioli.

“This is the food I like to eat when I’m out with friends. It’s fun, it’s social, and it’s something different than your traditional wings and nachos,” Crump said.

Crump says the wine and beer list is designed to stand up to the bold flavors in his international menu. Bright, crisp rosés, rieslings, and sauvignon blancs feature heavily on the wine list, and the bar’s 12 taps will pour a mix of local and seasonal craft brews.

The Renegade’s beverage program also includes a full-service coffee bar featuring Stumptown Coffee, a rarity in the DC area. The cafe will open at 6 a.m. Monday through Friday and 7 a.m. on weekends.

Crump was turned on to exceptional coffee while spending time in Costa Rica, where he and his father each owned properties, including a mountain coffee finca.

Later in the day, The Renegade will transition into a lively evening destination with weekly live musical guests who will play from the venue’s 20-foot stage. Crump and his team are currently booking their fall shows, which will feature a mix of local cover bands and original acts.

“The neighborhood has really been missing IOTA Club since they closed last year,” Crump said. “We want to give people a place to eat great food, have a drink, and catch a good show.”