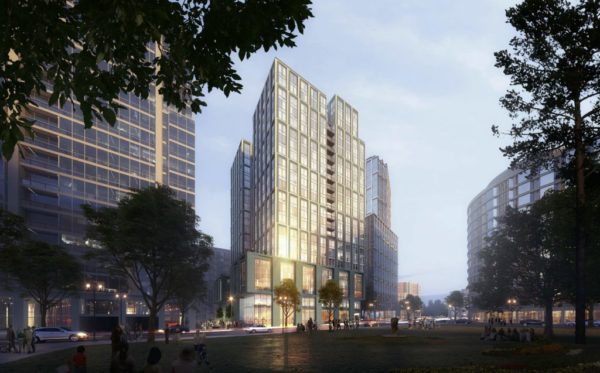 (Updated at 11:45 a.m.) As the development plans stack up for Crystal City and Pentagon City, the need for a new school could be growing.

As plans progress for Amazon’s second headquarters, developer JBG Smith has submitted its own plans to the county proposing to build thousands of additional apartments (and potentially condos) in the area, to help house the tens of thousands expected to one day work at HQ2.

JBG Smith’s plans for Crystal City and the Pentagon City area so far include adding:

However, the public elementary school that serves the area, Oakridge Elementary in the Arlington Ridge neighborhood, already is facing significant overcrowding.

While apartment buildings catering to younger workers are unlikely to generate an abundance of students — in 2015 it was reported that the entire 1,670-unit Riverhouse complex in Pentagon City only housed 30 Oakridge students — the redevelopment plans are still raising an eyebrow among those monitoring school capacity issues.

Local officials tell ARLnow that there are no specific plans in the works for building a new school to accommodate new students in the area. There has been past discussion, however, of Vornado (now JBG Smith) providing a site for a new school.

“As of this moment, [Arlington’s planning department] has not had any discussions with JBG Smith about any of their pending applications regarding providing a school site,” a county spokeswoman when asked whether there are current school-related discussions with the developer.

In an interview with the Washington Business Journal, Arlington County Board Chair Christian Dorsey said that in exchange for approving the massive developments, the county could ask JBG Smith for a package of “truly transformative community benefit improvements.”

Dorsey did not immediately respond to a request by ARLnow to clarify what might be included in such a package.

“APS has discussed an elementary school in that area in the past,” said school spokesman Frank Bellavia, when asked if Arlington Public Schools was considering adding a new school to the area.

“Specifically, the South Arlington Working Group had identified the Aurora Highlands neighborhood,” which is adjacent to Pentagon City and Crystal City, as a potential site, Bellavia said Thursday. “We are in the process of working through our future seat needs and will most likely need elementary seats in that neighborhood.”

Prior to its merger with JBG Smith, Vornado had given APS a tour of vacant office space it owned nearby which could be converted into a school.

APS will be updating its facilities plan in early 2020 as part of the county’s 2021-30 Capital Improvement Plan (CIP), according to Bellavia.

A spokeswoman for JBG Smith said the developer is “working with the County but it’s too early to discuss the community benefits package.”