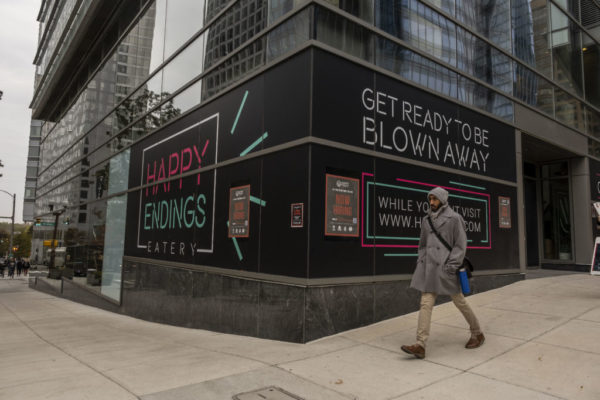 In Rosslyn, the owners of Chasin’ Tails, Tea’n You, and Lei’d Hawaiian Poke are opening a new food hall called Happy Endings Eatery. This time around, however, the double entendre name is generating some controversy.

The trio of Vietnamese-American brothers behind the successful restaurant group — two of whom are successful former poker players — may have just had their naming luck run out in the post-#MeToo era.

The names intended to reflect a light-hearted vibe — “we’re goofy people and we like to have fun,” one brother told ARLnow in 2015 — are now being questioned.

It doesn’t help that “Happy Endings,” which is also the name of the restaurant group itself, makes one suspicious of the big posted signage in Rosslyn announcing that Happy Endings Eatery is “coming soon” and “get ready to be blown away.” (The now hiring signs are more innocuous.)

Safe Bars Director Lauren R. Taylor had a strong reaction to the name of the forthcoming food hall. Her D.C.-based organization works to make bars, restaurants, and clubs safe and welcoming spaces.

“It diminishes massage body workers, it diminishes sex workers, diminishes women in general,” Taylor says. She believes the “jokey” innuendo contributes to “the dehumanization of all of those groups of people I mentioned before, especially women. It’s really not OK. Personally I wouldn’t even feel comfortable going there even though they probably have the greatest food in the world.”

“We do not support the exploitation of people in any way,” a statement from the company to the City Paper said. “Our name is meant to be lighthearted, memorable, and positive in the same way that a children’s fairytale has a happy ending.”

Some seem to be saying that the fairytale explanation, however, is just that — a fairytale meant to explain away an obviously bad name.

One Rosslyn resident who reached out to ARLnow suggested that Happy Endings has taken things too far.

“Its signage says in big letters get ready to be blown away,” the resident said in an email, while asking where he could file a complaint. “It’s all quite inappropriate.”

It won’t get much better inside, once Happy Endings opens: the food hall will focus on Vietnamese food, with food stalls sporting names like Roll Play and Pho Play.

What do you think about the name controversy? Should the food hall’s name be changed?