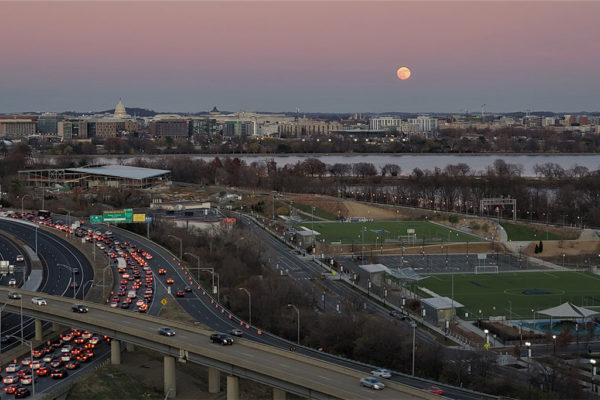 Home Sale Prices Near HQ2 Drop — “Home prices in the neighborhoods where Amazon.com Inc. is setting up its second headquarters dipped to below pre-HQ2 prices for the first time since the company made the announcement just over a year ago. The median sale price for [the 22202 ZIP code] was $507,500 — a 12% drop from median prices in November 2018.” [Washington Business Journal, Twitter]

HQ2 May Help Balance Local Dating Scene — “For every 100 single, college-educated individuals in the Washington area, women outnumber men 53-47. And single women with college degrees are coming here at a faster clip than men in the same demographic, census data show… could Amazon’s expansion into Arlington import enough men to give some local women a statistically better shot at love?” [WAMU]

Big Emergency Response in Pentagon City — From Arlington County Police, regarding a large emergency response outside the Pentagon City mall around 8 p.m. last night: “Police responded to the report of a fight. One victim suffered minor injuries.” [Twitter, Twitter]

New Art Installation on ART Buses — “The latest Art on the ART Bus exhibit is up! The exhibit features seven letter-pressed placards that honor Arlington’s 60th anniversary of the seven lunch counter sit-ins from June 9 to June 22, 1960. The sit-ins were peaceful protests to challenge widespread segregation policies.” [Arlington Transit]

Nearby: Alexandria Also Ends Glass Recycling — “Alexandria will no longer collect glass curbside for recycling… Starting Jan. 15, if you’re hoping to get your glass recycled rather than just tossed out with the trash, you’ll have to take it down to the purple bins at one of four facilities in southern Alexandria.” [ALXnow]