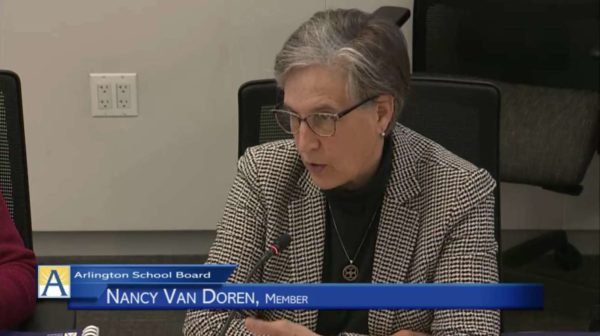 Arlington County may have opted to keep the tax rate steady, or even cut it, but the Arlington Public Schools (APS) says it still needs to find a way to bridge at least a portion of a $27.6 million budget gap.

In total, Interim Superintendent Cintia Johnson’s budget comes out to $725.9 million in expenditures and only $698.4 million in revenue, assuming the transfer from the county to the school system remains as proposed by County Manager Mark Schwartz.

Budget gaps are nothing new for APS, but the difference has often been covered by tax hikes that are off the table for this year. The familiar pattern prompted some cynicism at a budget work session last night from School Board member Nancy Van Doren, who said she’d been through the budget dance six times and hoped that maybe this year would be different.

“Maybe I’ve just done this too many times but I know the process we’re about to go through,” Van Doren said. “We have a greater need than the money allocated to us by the county. They have proposed their tax rate and it’s not going to be enough for us to cover our budget. Therefore we’re going to them and asking them for more money. They’re going to decide how much they give us and we’re going to adjust our budget.”

“That will involve a lot of community angst,” she added.

Van Doren proposed, at some point in the budget process, meeting with the County Board formally before the School Board prepares its final budget.

“There’s a script to this that we all go through, and it’s exhausting,” Van Doren said. “I’m wondering if we might write a letter to the county and say ‘we have a 27 million shortfall, how much are you going to help us with’ so we can cut to the chase and find out what we have to close.”

She faces a similar veteran of budget gaps, County Manager Mark Schwartz, who in his budget presentation to the County Board said he fully expected APS to request more funding, but that the $17.7 million more than last year that the school is receiving should be enough to account for the increase in students.

Johnson’s budget presentation cited a 4% increase in enrollment and rising costs for students with special needs, transportation services, substitutes, ADA accommodations and health insurance as factors in the gap. Enrollment growth accounted for $12.8 million, but that was not the largest new cost in the budget.

The largest cost increase in Johnson’s budget is a step increase for school employees and a 1.6% cost of living adjustment, totaling to $18 million. There are also $10.3 million in one-time and ongoing costs for opening five new schools and programs, according to a press release from APS.

The budget also proposes 84 new special education and special needs positions throughout the school system — at an annual cost of $6.56 million — and around 35 new full-time English Learner teachers, at an annual cost of $3.89 million, to comply with a settlement with the U.S. Dept. of Justice.

The help bridge the budget gap, Johnson proposes eliminating the Foreign Language in Elementary School program, which has some fervent supporters but would save $2.79 million annually if nixed. The budget also proposes using $18 million in reserve funds, arguing that is an appropriate use of reserves given this is an “unusual [budget] year with increased external pressures.”

The budget includes three tiers of additional, proposed cuts that at most only get the gap down to $10.2 million.

The last step would be the elimination of the planned employee compensation increase, which would entail getting rid of the step increase and cost of living adjustment, saving $10.3 million.

“Even with all these reductions, we would still be faced with a $10.2 million deficit,” Johnson warned.

The budget was proposed at a School Board meeting last night, with work sessions scheduled to continue throughout March. The School Board is scheduled to present a budget to the County Board on April 12 and adopt a final FY 2021 budget in May.

“We have made tough decisions and recognize that if we do not get the funding to close our $27 million gap, we will need to realize further reductions and eliminate the tiered needs represented in this budget,” Johnson said in a press release. “We need to continue to align our work with the APS Strategic Plan with the mission to ensure all students learn and thrive in a safe, healthy and supportive learning environment.”