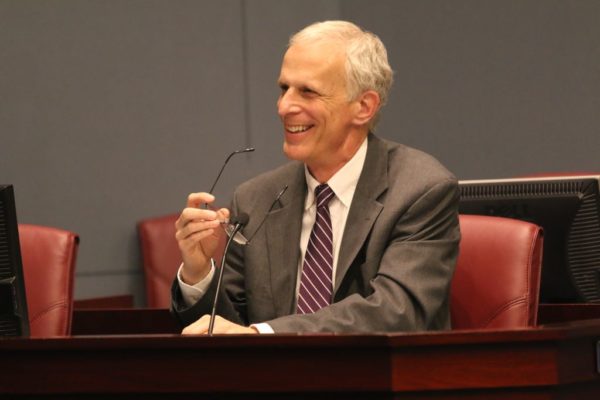 Arlington’s top executive is calling for a real estate tax hike and some select staff cuts to meet rising expenses passed along by county schools.

However, County Manager Mark Schwartz’s proposed budget for the new fiscal year is not quite as unpalatable as he’d initially feared.

Schwartz offered a first glimpse at his budget proposal for fiscal year 2020 to the County Board at a work session today (Thursday). The headline number: a 1.5-cent tax increase.

Unlike last year, when the Board opted to keep the tax rate level, Schwartz is envisioning bumping the base real estate rate to $1.008 per $100 of assessed value.

That’s a 4 percent jump from last year, factoring in the increase in real estate assessments, generating an extra $11.7 million for the county on an annual basis and costing the average homeowner an extra $277 annually. Schwartz plans to leave most other tax rates and fee schedules untouched.

In all, the annual tax burden on the average homeowner would reach $8,890, including car taxes and fees, trash collection charges, and water and sewer fees.

Neighboring Fairfax County, meanwhile, is considering holding its tax rate level at $1.15 per $100, while Alexandria’s rate is also likely to be held steady at $1.13.

Schwartz hopes to save $5.2 million by slashing a total of 29 full-time staff positions and one part-time role from the budget. Eleven of those positions are currently unfilled, and Schwartz is characterizing those cuts as ways to reform inefficient programs rather than as painful losses for the county.

The county manager had originally projected doom and gloom for the new year’s budget, predicting that the county would need to close a gap of anywhere between $20-35 million on its own, with the school system tacking on a $43 million deficit too. But Schwartz told reporters today that the county’s budget picture has improved substantially since those initial estimates in the fall, giving him a bit more room to maneuver.

“This budget been a little bit more of a meandering trail than a straight line,” Schwartz said. “I thought I’d be coming to the community proposing a budget with reductions to fundamental services in the county. We’d be doing less maintenance, we’d have fewer programs. That’s not really the case.”

Schwartz chalks up the sudden change partially to property values ticking up a bit more than the county anticipated — assessments saw a 3.5 percent increase this year, while Schwartz says the county projected a 2 percent jump.

That’s not to say that the county is out of the woods, fiscally speaking.

Schwartz says he’s still not sure just how large the school system’s budget gap might be, and the extra $24.8 million he plans to send to Arlington Public Schools next year still likely won’t be enough to meet all their needs. APS is opening three new schools next year, prompting plenty of new expenses, and persistently rising enrollment projections means that the school system will need to keep adding new buildings going forward.

“They still have something of a gap that will require cuts,” Schwartz said. “I can’t really quantify what those cuts would be, but I’m sure we’ll hear from the schools community and the School Board when the [County Board] has to decide what to advertise that my penny [on the tax rate] for them wasn’t enough.”

That tone toward the school system could set off yet another round of wrangling between the county and the School Board, which has repeatedly argued for more cash to fund school construction. School leaders narrowly avoided class size increases last year, but the Board is already warning that they may not be able to do so this time around.

Another potential spot of trouble for the county is Metro. Schwartz plans to spend an additional $45.6 million to support the transit service in FY2020, with only a 3 percent increase in expenses to fund Metro operations specifically. That’s a key figure because the deal to provide dedicated funding to Metro mandates that Virginia localities can’t increase spending on the transit service by more than 3 percent each year, but WMATA General Manager Paul Wiedefeld is courting a bit of a dispute on the issue.

He’s proposing a Metro budget that calls for substantial changes aimed at boosting ridership, which would require localities to blow past that 3 percent spending cap. Wiedefeld argues that he’s crafted a way to avoid violating that stricture — Arlington officials disagree, and Schwartz said he had no desire to push the envelope on this front.

“We had a deal, this is the deal and to the extent that there’s more [money] that has to be added, we can talk about it,” Schwartz said. “But I wasn’t prepared to make the choices on my own right now to defund a county program in order to do something I think might be questionable.”

Aside from Metro, the rest of the budget includes raises of 3.25-3.5 percent for all county employees, including pay bumps of up to 5.5 percent for Arlington first responders, a key part of last year’s budget deliberations.

Schwartz also hopes to add four new staff positions geared around adapting to Amazon’s growing “HQ2” presence, assuming the Board signs off on an incentive package next month to bring the tech giant’s new headquarters to Crystal City and Pentagon City.

Most of those staffers will be dedicated to handling the surge in development activity the county is expecting to see related to Amazon’s arrival, even though the tech company itself will only have limited development demands. For instance, Schwartz pointed out that the county is planning on receiving three times as many applications for site-plan developments as they do in the average year, a clear sign of interest in major mixed-use development.

“There’s a whole bunch of other plans I’m assuming people have had on their shelves that they want to dust off, based on what they perceive as new economic circumstances,” Schwartz said. “And that’s a lot of what they’ll be be available to address.”

Schwartz is projecting that the fees attached to those extra development applications will generate an extra $1 million or so each year. He’s leaving that money untouched in his budget projections, giving the Board the full discretion to spend it “to address any other impacts from Amazon that they think are appropriate.”

He hopes to send an extra $500,000 to the county’s housing grants program, which hands out cash to low-income and disabled renters to help them afford homes in the county. Schwartz is also planning another $200,000 for the Affordable Housing Investment Fund, a loan program designed to help spur the construction of reasonably priced homes in the county.

He also wants to make more of the cash the county sends to that fund each year “ongoing,” instead of being subject to yearly appropriations from the Board. Under the budget proposal, $8.7 million of the $14.5 million AHIF contribution would stay in the county’s budget going forward — an increase of about $1.5 million in ongoing cash.

That’s a change desired by several Board members, and Schwartz added that he also hopes to move away from the Board’s tradition of using leftover “closeout” funds at the end of each budget year to fund the program.

“That’s not a sustainable way of doing it, so year over year, we’re chipping away at it,” Schwartz said. “I’m not saying we’ve solved the affordable housing issue, but we’re doing more than we’ve ever done before, and we need to do more than that.”

The Board will now vote Saturday (Feb. 23) on an “advertised” tax rate — that will then become the highest rate the Board could ultimately set, though it could opt for a lower tax rate.

Schwartz says he has prepared options for the Board should they opt not to raise the tax rate, but he expects the cuts that would entail would not be palatable to Board members.