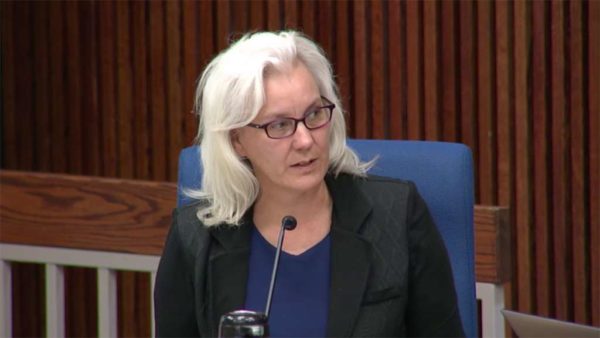 New school enrollment projections have reignited the long-dormant debate over the wisdom of building a fourth comprehensive high school in Arlington, as officials plot out the best strategy to educate a student population that won’t stop growing.

It was not exactly breaking news when planners revealed that the school system’s enrollment is projected to grow by about 24 percent over the next 10 years. APS has added an average of 800 students annually for the last five years, after all.

But school leaders were a bit surprised to see that growth continuing apace, after initially expecting the number of students flowing into the county start falling through 2028, not rising. Even more notably, the new projections show about 2,778 additional elementary schoolers set to enroll in Arlington schools over the next 10 years, about 1,000 more than school planners projected just a year ago.

Considering how young those students are, that number could demand a major reexamination of the school system’s plans to add new high school seats.

The Board decided back in 2017 to build room for 1,300 high schoolers split between the Arlington Education Center and the Arlington Career Center, avoiding the expensive and difficult task of finding space for a fourth comprehensive high school in the county. But these new projections have some Board members wondering if that will be enough to meet these enrollment pressures.

New County Board member Matt de Ferranti also raised some eyebrows by suggesting in his introductory remarks on Jan. 2 that the county should fund a new high school, but not all of Arlington’s elected leaders are similarly convinced.

Superintendent Patrick Murphy urged the Board to “take a breath, look at this one year, and see if these patterns begin to play themselves out over a long period of time,” and some members agreed with a more cautious approach to the new projections.

“APS enrollment is growing faster than the available funds we have to address our growth, for operating needs (teachers, textbooks, buses) as well as for capital projects (building and expanding schools),” School Board Chair Reid Goldstein wrote in a statement to ARLnow. “It’s important to remember that student enrollment and projections are just a snapshot of one major factor. That’s why we will continue to emphasize flexibility in our planning so we can be responsive and adaptable to address our future community and operating landscape.”

But, for some parents who have long demanded a new comprehensive high school in the county — joining Wakefield, Yorktown and the newly renamed Washington-Liberty — the new projections only underscore the urgency of what they’ve been asking for this whole time.

“I think the data have been suggestive for quite some time that Arlington will need a fourth high school, and it seems to make the most economic sense to do that project all at once and not in pieces,” Christine Brittle, a market researcher and APS parent who has long been active on school issues, told ARLnow via email.

But Brittle did add that it was “surprising” that Kanninen sees a need for a new high school even after the Career Center project is finished.

It remains an open question just how the Career Center will look once the school system can add 1,050 new seats there, work that is currently set to wrap up by 2025 or so. As part of deliberations over its latest 10-year construction plan last year, the Board agreed to build some of the same amenities at Arlington’s other schools at the Career Center.

But the county’s financial challenges meant that the Board couldn’t find the cash to build all of the features to make the Career Center entirely equivalent to a comprehensive high school, and a working group convened to study the issue urged the Board to open it as an “option school” instead of requiring students in the area to attend a school without the same amenities as others elsewhere around the county.

Accordingly, Brittle would rather see the Board simply expand its plans for the site instead of setting out to build a whole new school.

Such a switch would come with its own complications — as the school system’s Montessori program leaves Drew Model School, it’s currently set to move into the old Patrick Henry Elementary, which sits next to the Career Center. Any move to transform the site would likely require finding a different home for the Montessori students instead, at least in the long term.

“It would be far cheaper to find some additional, offsite-but-nearby field space, add a pool to the already robust Career Center plans, and find another building to repurpose for elementary Montessori, rather than building a large choice high school, which they may or may not fill, and then having to turn around and build a fourth comprehensive high school elsewhere (with money Arlington does not have),” Megan Haydasz, an APS parent who’s advocated for more amenities at the Career Center, told ARLnow via email.

However, Kristi Sawert, the president of the Arlington Heights Civic Association and a member of the Career Center working group, pointed out that APS is already pretty far down the path when it comes to moving the Montessori program to the Henry building. The Board recently agreed to reprogram hundreds of thousands of dollars to renovate the building to prepare for the Montessori students’ arrival, which she sees as an admission that “APS has no plans to tear it down to create a full-scale fourth high school (especially given that APS has a huge money deficit).”

“But I could be wrong,” she wrote in an email.

Still, that sort of option may well be on the table. Some Board members saw a need for more high school seats, but they didn’t share the same conviction that a fourth comprehensive school is the only way to achieve that goal.

“We’re going to have to put [these students] in a high school,” said Board member Nancy Van Doren. “1,300, 1,400 seats, that’s not enough, and we don’t have a school for all those kids in the [Capital Improvement Plan].”

Yet part of what drove Kanninen’s conviction that APS needs both new seats at the Career Center and a new high school is her belief that the county’s 10-year enrollment projections don’t tell the whole story.

Many of the new students planners expect to see in the coming years are young enough that they won’t be reaching high school by the time 2028 rolls around, convincing Kanninen that the data don’t paint a full picture of the school system’s in the distant future.

“The future kindergarteners you’re projecting won’t be in high school in 10 years, it’ll be 20 years,” Kanninen told APS staff at the Jan. 24 meeting. “We’re not seeing in this projection how many high school seats we are going to need… We need another high school down the road. We really need to clarify that story, and it’s really clear from this data in a way it never has been before.”