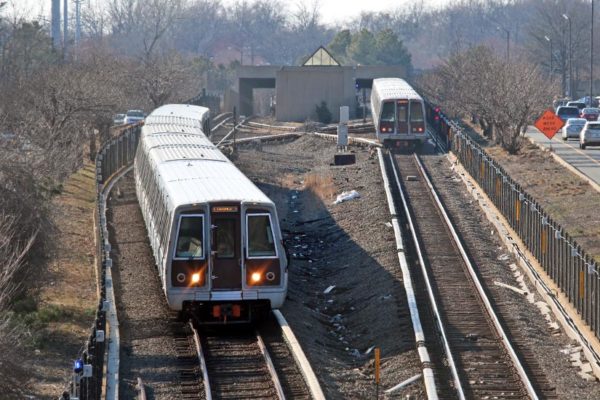 With very few people riding Metrorail during the coronavirus pandemic, Metro announced today that it will expand its previously-planned closures and shut down the Silver Line over the summer.

Additionally, Metro says it will be combining the platform work with a separate project to link up the current Silver Line with the new “phase II” stations.

As a result, all stations west of Ballston will be closed from Memorial Day weekend through the fall, and several new shuttle bus lines will replace the rail service.

A number of station closures are already in place as a result of the pandemic and low ridership, including the Clarendon, Virginia Square and East Falls Church stations. Though the normally-busy Ballston station is now the only open station in Arlington west of Courthouse, Metro says ridership is way down.

“As a result of the COVID-19 public health emergency, ridership at stations west of Ballston totals about 1,200 customers per weekday — less than 5% of normal ridership,” the transit agency said.

More from a Metro press release, below.

Making the most of historically low ridership and traffic-free highways, Metro today announced plans to combine the schedules of its two biggest capital priorities in Virginia: rebuilding platforms and connecting the Silver Line to Metro’s existing network.

Under the expanded plan, Metro will combine this summer’s work demolishing and reconstructing platforms at four Orange Line stations with a separate project on the Silver Line to connect Metrorail to the new “phase II” stations, which are being constructed by the Metropolitan Washington Airports Authority (MWAA).

The resulting summer shutdown will close a total of nine stations from Memorial Day weekend through the fall.

“This is about two things: working smarter and working safer,” said Metro General Manager and Chief Executive Officer Paul J. Wiedefeld. “Closing the stations to get the work done while ridership is historically low allows us to limit the exposure of our frontline staff and contractors, mitigate delays to our capital program, and minimize inconvenience to the public.”

Under the new plan:

As a result of the COVID-19 public health emergency, ridership at stations west of Ballston totals about 1,200 customers per weekday – less than 5% of normal ridership.

Metro’s platform contractor, Kiewit, has implemented new protocols and procedures to ensure that construction crews are as safe as possible in light of the COVID-19 outbreak. Because the effect of these safety measures on the project schedule is not yet known, Metro will announce an expected reopening date for the affected stations after construction gets underway.

Shuttles will not stop at stations closed due to Metro’s response to COVID-19.

Metro’s Board approved plans to provide free parking at Vienna and Dunn Loring through the end of the summer shutdown.

No customer parking is available at East Falls Church Station due to construction activity.

Stay at home orders in effect

Use of Metro should be limited to essential travel only, as stipulated under stay-at-home Executive Orders in effect throughout the Metro service area. Essential travel includes first responders, hospital staff, critical government employees, grocery and pharmacy workers, and others who must work during the public health emergency. Unless traveling for an essential purpose, you are urged to stay at home.