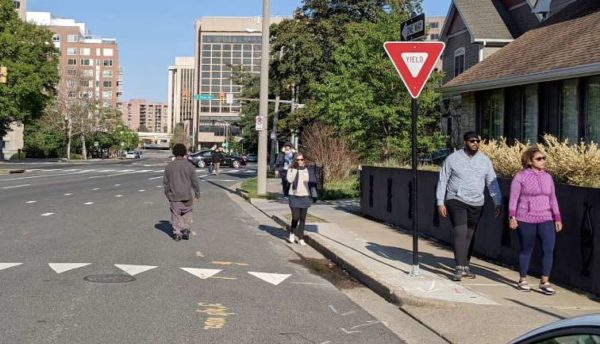 Those who want to see Arlington close lanes or whole streets during the pandemic will have to keep waiting.

County officials say they don’t have the resources to close lanes  in order to create extra space for social distancing among cyclists and pedestrians.

“Due to the many challenges involved, there are no plans at this time to open/close vehicular traffic lanes for walkers and bikers,” Arlington County spokeswoman Jennifer K. Smith tells ARLnow.

Some — including ARLnow columnists — have been pushing for such closures, with vehicle traffic down and more people trying to get out of the house for outdoor recreation.

Local governments in Denver, Minneapolis, Philadelphia and other cities around the world have made more space for people, by taking away a lane of roads that have seen declining vehicle traffic or closing some roads altogether.

In D.C., about 700 people signed a letter requesting some lane closures to make larger sidewalks, turn some streets into “local traffic only” and open streets parallel to trail networks. […]

On Friday, Mayor Muriel Bowser shot down the idea on the Kojo Nnamdi show saying, “I don’t want to send the message to people to go out and have a festival.”

A few days later, Bowser announced the closure of a portion of Beach Drive in Rock Creek Park, along with two other parkways.

In Arlington, the neighboring Aurora Highlands and Crystal City civic associations have made specific lane closure recommendations to the County Board, calling for lanes along S. Hayes Street, S. Joyce Street, 12th Street S. and Potomac Avenue to be blocked off.

“Local residents are at risk of coronavirus exposure while being outdoors because of limited space for essential social distancing,” Aurora Highlands Civic Association President Scott Miles wrote in an email last week. “Bike lanes are limited and sidewalks are too narrow to keep a safe distance from the crowds of fellow travelers. Meanwhile vehicular traffic is low, and street parking is underused as most offices and non-essential retail are closed.”

The two civic associations recommended “a specific network of connected streets that are relatively flat and straight, creating better visibility for everyone and easier travel for all pedestrians, including those with disabilities,” he added.

In an online town hall this past Friday, however, Arlington County Police Chief M. Jay Farr said the police department doesn’t have the “thousands” of traffic cones and barriers, not to mention the extra staffing, to create and enforce temporary pedestrian zones on local streets.

He said road closures might look easy during special events, but those events are planned well in advance, are for a short period of time, and require a “tremendous amount of resources and assets… to keep the roads safe.”

“It looks like closing the road is really not going to be that complex the thing, however I just wanted to remind everybody that when we start to look at any road closure there’s a number of factors that go into it,” including things like parking and access to buildings, he said.

“We have many businesses that are dependent upon the conversion of some of our parking to pick up in drop-off spots,” Farr continued. “Most of the places that I’ve seen identified [for closures] also include a number of avenues in and out of apartment buildings or in and out of somebody’s home.”

More from the town hall: