Portions of the Mount Vernon Trail in Arlington should be widened due to heavy use and crash risks, according to a new study.

The National Park Service this month released a report on its Mount Vernon Trail Corridor Study, which examined the condition of the trail, usage patterns and potential improvements.

The trail, which runs along the Potomac from the Rosslyn area to George Washington’s Mount Vernon estate, is used by more than one millions cyclists and pedestrians per year. But its 1970s-era design no longer reflects current engineering standards and the trail’s heavy usage, the report says.

“The trail is relatively narrow by modern standards, and characterized by meandering curves, timber bridges, and in some areas, dense vegetation,” says the report. “The MVT is beginning to show its age, from deteriorating pavement and bridges, to limited accessibility features, and outdated signage and striping. These attributes, combined with increasing usage and user behavior, contribute to risk exposure and considerable crash history.”

There were 225 reported bike and pedestrian crashes on the trail between 2006 and 2010, according to the study. Many of those were at crash hotspots along the trail in Arlington, including near Reagan National Airport, Gravelly Point and the 14th Street Bridge. 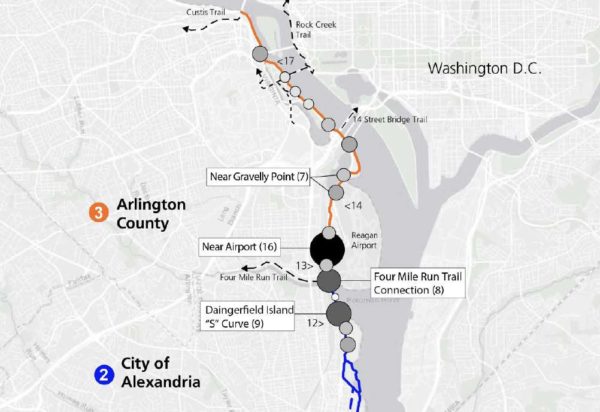 “Trail intersections, roadway crossings, surface transitions, and blind curves along the MVT were associated with higher crash and injury rates,” the report says. “On average, the MVT experiences one ambulance call per week related to a bicycle or pedestrian injury.”

“Collisions are more likely to involve male bicyclists (although males are typically overrepresented in the bicycling community),” the study also notes. 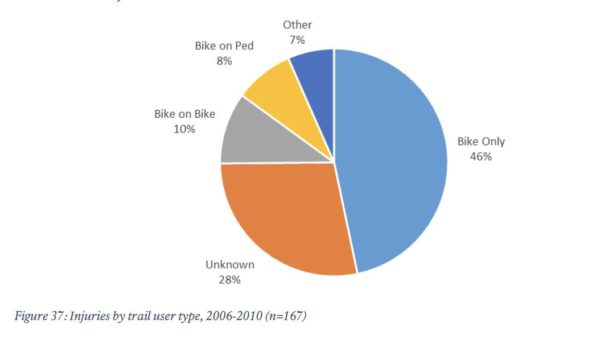 Among the near-term (1-4 year) improvements recommended in the report are new way-finding signs, increased trail maintenance, reduced-slip surfaces on bridges, and new “slow zones” at certain points on the trail.

“‘Slow zones,’ including the appropriate signage and pavement markings [could] be used at areas of high conflict among different trail users (e.g., at Arlington Memorial Bridge, Belle Haven Park, Gravelly Point, and other appropriate locations),” the report says.

The recommendations for medium-term changes — potentially 5-7 years away — are more drastic.

The study recommends that portions of the trail in Arlington be reconstructed and widened to at least 11 feet, in accordance with modern multi-use trail standards, compared to the current average 8-9 foot width. Another possibility: separating cyclists and pedestrians in high-traffic areas like Gravelly Point.

More from the report:

Widening the trail to meet this standard improves trail safety by providing appropriate width to minimize user conflict in high-traffic areas. Focus areas for widening and modernization include:

A Mount Vernon Trail widening might not sit well with some local activists. A similar proposal, to widen portions of the W&OD Trail in Arlington and provide separate lanes for cyclists and pedestrians is facing opposition from some who have expressed environmental concerns.

END_OF_DOCUMENT_TOKEN_TO_BE_REPLACED

More Stories
Hospitalizations in Arlington Hit Multi-Week LowStatutes of Liberty: Brother, Can You Spare a Dime? USCIS Seeks a Bailout from Congress