(Updated at 9:25 a.m.) In addition to the official woodlands paths and trails through Arlington parks, a visitor is likely to find countless other well-worn paths that criss-cross the park built from decades of use.

As Arlingtonians venture into nature for a social-distanced outdoors experience, a local group is hoping to legalize the natural trails and make them sustainable.

“Arlington County is the only area that doesn’t allow mountain biking,” said Matthew Levine, who runs Arlington Trails. “It’s a great way of getting kids into nature. Right now, a lot of people need to be outside.” 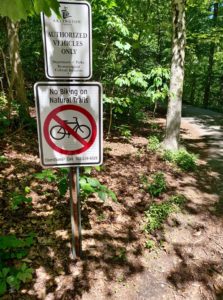 Susan Kalish, a spokeswoman for the parks department, verified that natural trail use is restricted to walking humans and dogs on leashes, due to the damage caused by bicycles.

“Bikes are not allowed on a natural trail in Arlington,” Kalish said. “Wheels on trails compact the ground and have a greater impact on the flora and fauna that make up our natural trails. Wheeled transport on natural trails compacts the soil and can destroy plants and damage tree roots. Compacted soils and less vegetation lead to water runoff and degradation of our streams. There are also safety issues as these trails are narrow and the walkers and bikers can’t easily step to the side without harming more vegetation and possibly themselves on steep embankments.”

Kalish said those trails have been damaged in recent months by irresponsible users.

“We find rogue, bushwhacked trails where trees have been cut down and plants pulled out,” Kalish said. “We’ve also found places where bikers have built ramps, jumps and holes.”

For Levine, the recent damage shows that cyclists are still using these trails despite local ordinance, and legalizing that use while providing less destructive options for use.

“Part of it is making these trails legal, otherwise there are rogue trails being built with thrillseekers going straight down,” Levine said. “If they’re not sanctioned and following protocol — that’s why you have kids in the woods building jumps.”

Nora Palmatier, an Arlington resident and a member of Tree Stewards of Arlington and Alexandria, said that the trails through the parks are currently unsafe for mountain biking.

“It is too dangerous for off-road biking in small parks,” Palmatier said. “Several of us have been hit getting off trails by speeding bikes. I discovered 13 holly saplings 6-10 feet tall chopped down for bike trails which is just wrong in Lacey Woods. I love to bike ride but not where it destroys wildflowers and trees or where it is too dangerous.”

Currently, many of those trails are desire paths — reflecting the most direct routes park users take from one place to another. Levine said those paths aren’t made with concerns about erosion and other issues in mind, which is why Levine and local organization Mid Atlantic Off-Road Enthusiasts (MORE) work to adapt those trails into sustainable paths. Emails Levine provided of his offers to do so in Arlington show park managers rebuffing those efforts.

The prevalence of new mountain bike trails and jumps sparked a recent debate on Nextdoor, the neighborhood social networking site. Some complained that the mountain bike paths and jumps were destroying the natural habitat of the parks. Others said the jumps were being created by kids with little to do during the pandemic, and criticized adults who had scolded the kids while in the park.

This isn’t the first time the debate over mountain bikes in Arlington parkland has surfaced. Last spring, cycling enthusiasts tried to push for mountain bike uses to be incorporated into the Public Space Plan but were rejected. Levine said his goal now is to go to the community and show them that maintaining trails and creating options for mountain bikers can be a public benefit.

“The goal is to get invited by the community and show outdoor recreation, sports, trails are good for you and sustainable and compatible with the values of Arlington as a place where you can stay healthy,” Levine said. “These are sustainable trails everywhere in the area but Arlington.”