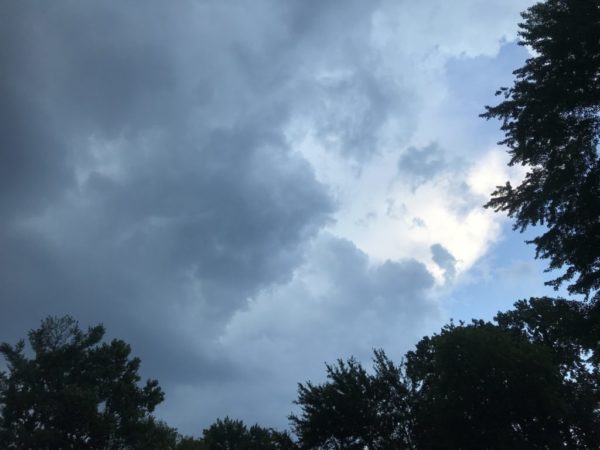 Another round of severe storms packing torrential rainfall and strong winds is possible today.

The National Weather Service has issued both flash flood and severe thunderstorm watches for Arlington and parts of the D.C. region.

“Severe thunderstorms are possible this afternoon and evening with locally damaging winds and large hail being the primary threat,” the National Weather Service says. “There is also an isolated threat for flooding.”

Another, possibly stronger and more widespread round of thunderstorms is expected this afternoon/evening. A Flash Flood Watch is in effect for the areas highlighted in green on map 1. Also, the threat level for severe weather has been increased across the areas in yellow on map 2 pic.twitter.com/JvPr1GcDKO

Severe Thunderstorm Watch for this afternoon and evening. pic.twitter.com/6CwJvsZBIm

THE FLASH FLOOD WATCH CONTINUES FOR

* UNTIL 9 PM EDT THIS EVENING

* THUNDERSTORMS WILL DEVELOP THIS AFTERNOON AND CONTINUE THIS EVENING ALONG THE I-95 CORRIDOR. SOME AREAS MAY EXPERIENCE MULTIPLE THUNDERSTORMS THROUGH THIS EVENING. RAINFALL AMOUNTS  OF 1-2 INCHES ARE POSSIBLE, WITH SOME ISOLATED AMOUNTS OVER 3  INCHES POSSIBLE. THIS AMOUNT OF RAIN OVER URBAN AREAS MAY LEAD TO INSTANCES OF FLASH FLOODING, AS WELL AS A POTENTIAL FOR CREEKS AND STREAMS TO RISE RAPIDLY IF SOME OF THE HIGHER AMOUNTS ARE REALIZED.