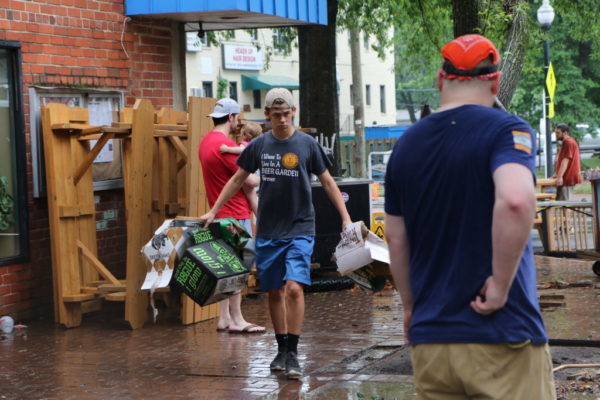 Nearly one week after advocates flooded the County Board with concerns that planned stormwater investments in the Capital Improvement Plan favor Arlington’s wealthier neighborhoods, staff returned to the County Board to argue that the proposed investments were addressing important issues below the surface.

The renewed push for improving the County’s stormwater capacity is tied to historic flooding that took place last year and devastated many Arlington homes and businesses. County Manager Mark Schwartz has proposed a $50.8 million stormwater bond, among other bonds, to be sent to voters in the November election.

Some speakers at the earlier meeting criticized the bulk of that investment, $26.9 million, for going to the Spout Run watershed that runs through affluent communities around Lee Highway. The watershed was identified by county staff as a location with some of the highest concentration of recent flood damage to homes. 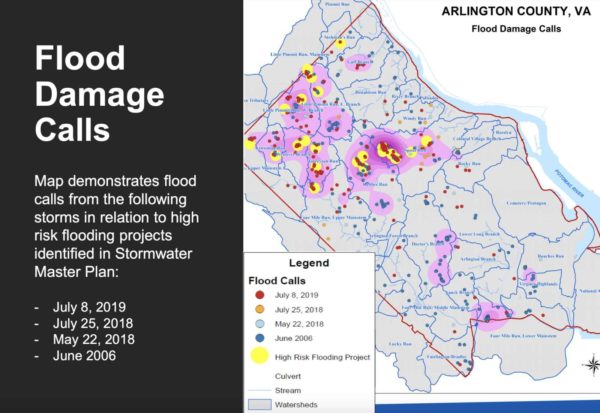 In a work session with the Arlington County Board yesterday (Thursday) Dept. of Environmental Services Director Greg Emanuel said the stormwater investment was based on the status of pipes below the surface and not the economics of the neighborhoods above.

“As you know, we’re trying to apply an equity lens on all our policy decisions,” Emanuel said. “[For] investments to infrastructure, unlike services with transit, we believe should be based on system-condition and need or identified deficiencies. We believe that should be regardless of demographics or geography, basically who is on the surface.”

Emanuel argued that, just as earlier investments had cut down on flooding around Four Mile Run in South Arlington, the proposed investments in northwest Arlington would provide lasting relief to residents struggling with flood issues. It would also benefit a wider swath of the county, he said.

“This decade, our proposed investments are predominately proposed for watersheds in the northwest part of the county based on modeling and actual experience,” Emanuel said. “It’s an interconnected system. Improvements such as detention in upper parts of a watershed will provide benefits to everyone in a system downstream of that, down to Four Mile Run.”

Speakers last week criticized the county for focusing on benefits to low-density neighborhoods, but Emanuel said the County’s modeling indicated that’s where the most severe flooding is.

Arlington is “investing the most where the most flooding is occurring, which is the northwest watersheds,” Emanuel said. “Of course, it’s not just there, we’re doing important things like dredging and important flood controls on the southern end near the mouth of Four Mile Run.”

Emanuel’s assertion that the northwest watershed was the most in need of stormwater investment went mostly unchallenged by the County Board.

County Board member Christian Dorsey questioned why areas like Alcova Heights, Douglas Park, and Aurora Highlands weren’t listed as priorities when data showed flooding calls from those areas. Emanuel said the calls from those areas — Douglas Park in particular — were mostly from sewage backups. While those could be caused by too much water from storms getting into the system, Emanuel said it still left those areas ranked at medium or low severity compared to other places.

While some in the community have pushed for more cleaning, Emanuel said the majority of the issues Arlington has with stormwater are related to low stormwater capacity levels — something that requires significant capital investment, as opposed to something that can be solved with routine maintenance.

“Through our routine cleaning, we rarely find things,” Emanuel said. “The way a good storm system is designed is it’s designed to be self-cleaning. Maybe small bits here and there but nothing to decrease flow. We kept going out and cleaning and finding nothing. We don’t have to make big changes because largely the system is self-cleaning. The problem is capacity.”

Dorsey said there is a misconception about the clearing of blocked storm drains being a viable solution to systemic flooding problems.

“Perhaps what we’re talking about is a little bit maybe of public education — that seeing a blocked storm drain that has debris in the front may not translate to diminished flow once you get onto the internals,” Dorsey said. “What we see with our own eyes is only a piece of the story, but not necessarily an actionable part of the story.”

Adoption of the CIP and November bond referendums is scheduled for the Saturday, July 18, County Board meeting.