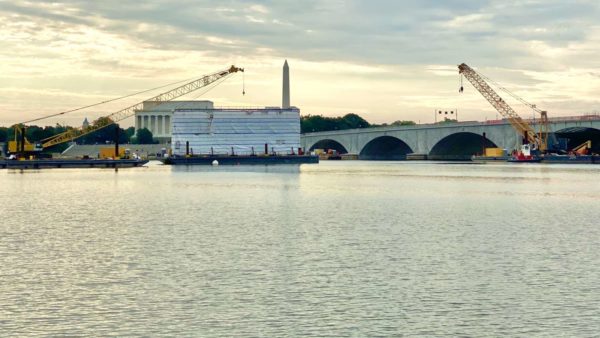 Dozens March for Racial Justice — “A group of about 100 people marched more than three miles on a hot August afternoon through Arlington demanding justice for victims of police brutality and calling on the county’s elected officials to bring police reform to the county.” [Patch]

Police Investigating More KKK Stickers — “Stickers that appear to promote the Ku Klux Klan have been found on traffic signs and utility boxes in Arlington over the past month, Arlington police said… They were found between July 2 and 28 in four locations, mostly in the Yorktown neighborhood, on the back of traffic signs and on a utility box.” [Washington Post]

Big Power Outage on Saturday — “A power outage in South Arlington has about 3,000 customers without power, according to Dominion Energy. The outage is affecting several neighborhoods between Columbia Pike and Interstate 395, including Arlington Mill, Columbia Forest, Douglas Park, and Nauck.” [WJLA]

Parents Rally Against School Plan — “All 12 school jurisdictions in the D.C. area have announced their intentions to start the 2020-2021 school year virtually, and not all parents are pleased with that decision. Vienna, Va. resident Jill Gartin rallied with other parents and students today at Arlington district headquarters to make their voices heard… ‘It’s been awful because I have five kids running on one wifi. It’s draining and the kids are miserable.'” [WJLA]

Ribbon Cutting for Vida — The Arlington Chamber of Commerce held a ribbon cutting ceremony last week for Vida Fitness’ new Ballston location, its first outside of D.C. It’s only the second ribbon cutting pictured on the Chamber’s Instagram account (the first was Bowlero in Crystal City) since the pandemic started. [Instagram]

Meridian Pint Fighting for Survival — “As you all may have heard, there is a possibility we may have to permanently close our doors. With the effects of Covid-19 the restaurant industry is feeling an enormous impact, Meridian Pint is no exception. We did get a Payroll Protection Loan but those funds have since been fully depleted. We are asking for your help.” [Facebook]

Nearby: MoCo May Reinstate Restrictions — “COVID-19 cases have been increasing across the state while Montgomery County’s have plateaued to about 70 to 80 new cases a day. But now officials are considering whether to reinstate some restrictions to try to decrease the virus’s spread and reduce cases.” [Bethesda Magazine]

Yes, But Where’s *This* Story? — Wondering why something that happened over the weekend was not included in Morning notes? We may be planning to cover it later today. Or, if it’s something that we might not know about, you can tell us about it for potential future coverage.

Next
JUST IN: Arlington Under Tropical Storm Warning Through Tuesday