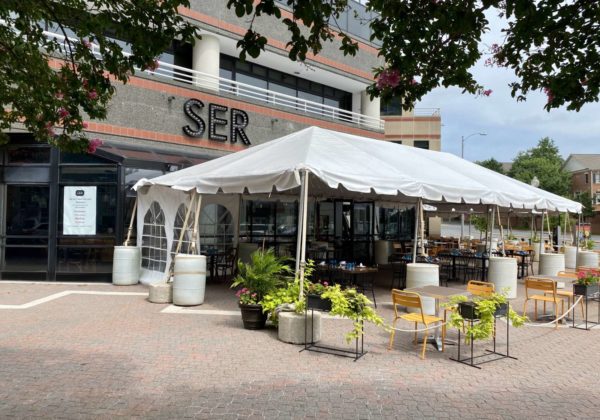 Ballston’s SER is no stranger to adversity.

Since its 2015 opening, the Spanish comfort food restaurant has flooded four different times.

After each flood, owner Javier Candon said SER faced temporary closure and extensive cleanup at its 1110 N. Glebe Road storefront. Through these hard times, though, Candon said he could always see light at the end of the tunnel.

Now, following a three month closure of SER’s in-person dining and with sales still down 40%, Candon sees only dark.

SER shut its doors in March when Virginia Governor Ralph Northam ordered non-essential business to close. Restaurants were still allowed to offer takeout and delivery, but SER was only available on Uber Eats.

Candon said the eatery’s first actions were to join DoorDash, Postmates and Grubhub, where customers continued ordering popular items like paella. Additionally, liquor and wine pick-up became available on SER’s website, after being allowed by the state.

Without a need for workers to run in-person dining, Candon said SER also let go of almost all of its staff. Only a couple cooks, the chef and a couple managers were kept to manage takeout operations.

As the pandemic progressed, SER began to reopen in line with the state. Phase 1 permitted 50% outdoor occupancy with tables placed six feet apart, so Candon opened the restaurant’s patio space and started rehiring workers to staff it.

Now that Phase 3 allows for indoor and outdoor seating with tables six feet apart, Candon said SER can seat about 70 people inside, or about 50% of its capacity, and around 80 people in its expanded patio space. He added that nearly all original staff members have been brought back.

Customers have been returning on Friday and Saturday nights, but Candon said SER’s overall business is still taking a sustained hit.

“Where we have been affected the most has been lunch business, since people are not back to the office,” Candon said. “Monday through Thursday night, we are down a lot because we used to have a lot of business in terms of happy hour and company parties and events. That’s not happening now and it’s not going to happen for a long time.”

SER received a PPP loan to help with rent, payroll and utility payments, but now has higher operational costs from spending on personal protective equipment, sanitizers and more staff to clean the building.

After the floods, SER’s insurance paid for income losses during the subsequent closures. Candon said the costs of staying open during the pandemic are not subject to the same relief, so SER is on its own if it hopes to stay afloat.