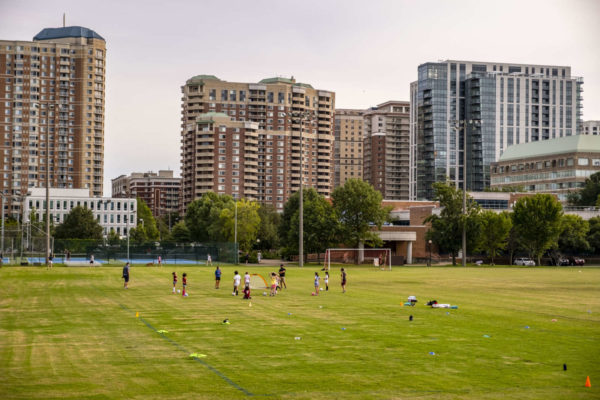 Italian Deli Coming to Pentagon Row — “Napoli Pasta Bar, the Bib Gourmand-designated Italian restaurant in Columbia Heights, will expand into Northern Virginia next month when it adds a sister deli in Arlington. Napoli Salumeria is expected to open in early October at 1301 South Joyce Street… The Pentagon Row space was largely turnkey ready, as it formerly functioned as a deli called A Deli.” [Eater]

Shirlington Movie Theater Reopens — The AMC Shirlington 7 theater reopened earlier this week, after closing over the weekend. A PR rep said the closure was due to a “plumbing issue.”

More Hazy Skies Possible — “More smoke from western wildfires likely to stream into DC area tonight and into Wednesday. Skies unlikely to be as blue as the past several days.” [Washington Post, Twitter]

Restaurant Break-in on Pentagon Row — “At approximately 10:41 a.m. on September 21, police were dispatched to the report of a larceny. Upon arrival, it was determined that at approximately 12:25 a.m., two suspects forced entry to a business, causing damage, and stole an undisclosed amount of cash and items of value. The suspects are described as males, wearing hooded sweatshirts, masks, and gloves. The investigation is ongoing.” [Arlington County]

Cooking School Adapts During Pandemic — Cookology at Ballston Quarter mall was just hitting its stride when the pandemic hit. After shutting down for weeks, the cooking school reopened via “Cookology Live” virtual classes. And now, the business has secured outdoor space at the mall’s covered “Instagram Alley” in which to hold in-person classes. [Washington Business Journal]

Apartment Building Designated as Historic — “The Glebe Apartments (now known as Knightsbridge Apartments) in the Ballston area has been placed on the Virginia Landmarks Register… The apartment complex, located in the 200 block of North Glebe Road, is an example of garden-style apartment units that were constructed in Arlington from the 1930s to the 1950s to provide moderately priced housing for a growing number of federal workers and, after World War II, returning veterans.” [InsideNova]

Today: ‘Spirit of Community’ Event — “Please join us for the 2020 Spirit of Community celebration on Wednesday, September 23 at 12 p.m… The program will include interviews with Chris Nassetta, President and CEO of Hilton, and Steve Presley, Chairman and CEO of Nestle USA.” [ARLnow Events]