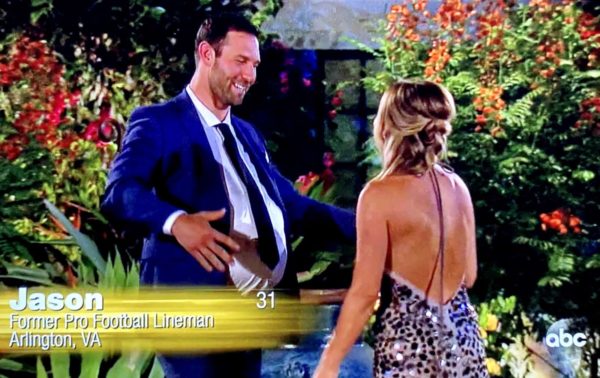 (Updated at 10:10 a.m.) There’s a “Bachelorette” contestant from Arlington.

Jason Foster, 31, is a former pro football player who lives in the Courthouse area and works as an Account Manager for a local staffing firm. His official ABC biography says he loves animals, spending time outside, and visiting Arlington’s historical sites.

“Jason prides himself on being able to have fun everywhere he goes,” the network’s bio says. “On the weekends, Jason loves to spend his days visiting historical monuments around Arlington or kayaking on the Potomac River.”

Foster was an NFL lineman after college at the University of Rhode Island, with stints on the Indianapolis Colts, Oakland Raiders and Tampa Bay Buccaneers, before wrapping up his pro career with a year in the Canadian Football League, according to his LinkedIn page.

“After suffering too many concussions on the field, [Jason] decided to prioritize his health and change the direction of his life,” the network bio says. “Since leaving the NFL in 2016, he has lost 120 pounds and started a career in IT staffing and solutions.”

One of two contestants from the D.C. area this season, Foster says on the show that he was born on Long Island but moved to Vermont with his family as a young kid.

Foster made an impression on Bachelorette Clare Crawley, 39, by getting out of the limo with a pillow tucked under his dress shirt — a reference to Crawley’s “pregnant” limo exit when she was a contestant on a previous ‘Bachelor’ season. There was, however, an awkward moment when Foster compared Crawley’s looks to his mom’s.

In the end, Foster was one of the lucky guys to get a rose and advance to next week. If he continues to advance he might end up courting a different lady — reports suggest that Crawley exits the show early after falling for one of the contestants, at which point previous ‘Bachelor’ contestant and fan favorite Tayshia Adams is brought on as the new lead.

Foster is not the first Arlingtonian to appear on the long-running reality franchise.

A local high school teacher failed to get a rose from Brad Womack on the first night of the 2011 Bachelor season.

Jillian Anderson, a former TV producer who currently works as a publicist, produced a memorable moment in 2015 when she slipped on a rug when accepting a rose early on, before being eliminated soon thereafter. She also appeared, briefly, on the ‘Bachelor in Paradise’ spinoff show, but found her happy ending last year after getting engaged to a work colleague, Mike King, who goes by the Twitter handle @kingofarlington.

Another Arlington connection to the show: Chris Bukowski, co-owner of the Bracket Room in Clarendon, is a repeat ‘Bachelorette’ and ‘Bachelor in Paradise’ contestant who holds the title of most appearances on the franchise.

Here’s what Foster said last night on Instagram about his five minutes (so far) of reality show fame:

The face you make when you realize, welp, here we go, I went on The Bachelorette and I have no idea what the hell I’m doing, but let’s enjoy the ride and see where it goes. I hope you all enjoy this season! #thebachelorette