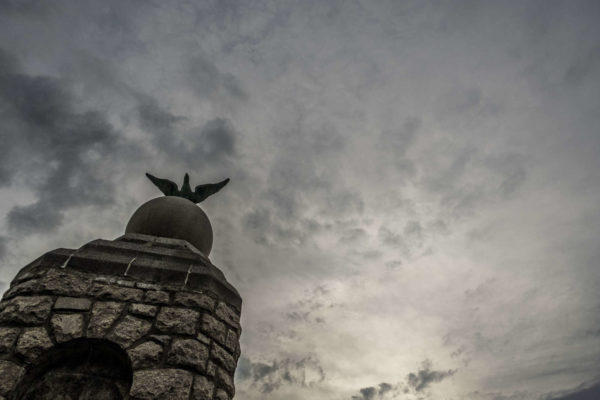 Big Jump in Local Home Sales — “The red-hot summer real-estate market that evolved out of the springtime COVID crisis showed no signs of abating in September across Arlington. If anything, the market last month doubled down – literally. Home sales across the county totaled 274, up 44.2 percent from the 190 transactions recorded in September 2019.” [InsideNova]

Dems Protest Outside Trump HQ — Democrats protested outside of Trump reelection HQ in Rosslyn yesterday morning, criticizing the president for not agreeing to a virtual debate with Joe Biden. They came with signs and a large “Baby Trump” balloon. [Twitter]

Photos: Outdoor Coworking Space in Rosslyn — “Like dining out and birthday parties, coworking is now an outdoor activity thanks to the pandemic. At least it is in Rosslyn. Today, the new O2 pop-up (short for Outdoor Office) opens in Gateway Park by the Key Bridge.” [Washingtonian]

Amazon Employees to Keep Teleworking — “Amazon.com Inc.’s corporate offices may not return to pre-pandemic staffing levels until the middle of next year, with some managers telling their teams that they can continue to work from home until summer 2021.” [Washington Business Journal]

ART Bus Ridership Down — “For the fiscal year ending June 30, the ART system – funded by the Arlington government but operated by a private contractor – reported an average daily bus boarding total of 8,224, down 12.8 percent from the 9,434 reported for the previous fiscal year.” [InsideNova]

ABC Stores Are Doing Just Fine — “From March to September, [liquor sales in Northern Virginia] were up almost 17 percent over the year before: an average of nearly $37 million per month. March remains the month with the highest dollar amount of liquor sales in NoVa, at $39.3 million. July wasn’t far behind, with $38.5 million.” [Washingtonian]