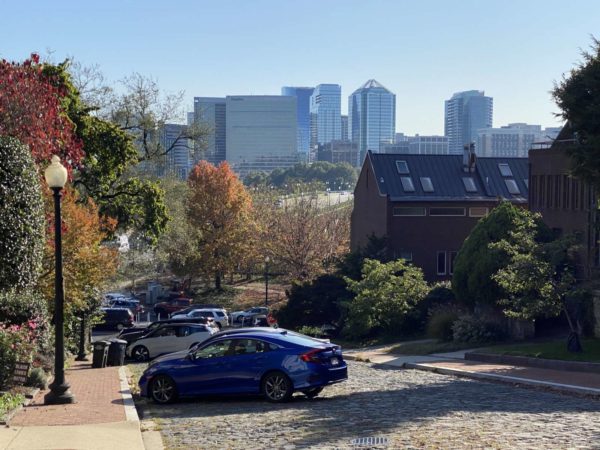 Arlington, MoCo Hire Consultant — “Montgomery and Arlington counties have hired a consultant to develop alternatives to the flight paths at Reagan National Airport that have led to dramatic increases in noise complaints from residents across the region. ‘This will be a game changer,; said Ken Hartman… Montgomery County’s point person on the airplane noise issue.” [Washington Post]

Biden Breaks 100K Mark in Arlington — “It likely won’t be the highlight of his political career, but Joe Biden will go down in history as the first presidential candidate to win more than 100,000 votes in Arlington. Biden garnered 102,510 of them, according to unofficial tallies reported immediately after the election… Trump’s performance, both in total votes and in percentage of the vote, slightly outperformed his 2016 tally in Arlington.” [InsideNova]

What the School Bond Will Fund — “The $52.65 million will be used for the following projects: $24.3 million for planning and design to meet 10-year projected capacity needs at all school levels; $15.4 million for major infrastructure projects such as HVAC replacement for schools; $7.65 million for building refreshes and kitchen renovations at ATS, Key and McKinley; $5.30 million for security entrances at Taylor, Gunston, Jefferson, Williamsburg, Wakefield.” [Arlington Public Schools, InsideNova]

Firefighter Follows in Fallen Father’s Footsteps — “The son of a Washington, D.C. fallen firefighter is following in his dad’s footsteps. When Anthony Phillips Jr.’s father died in the line of duty on May 30, 1999, he never thought he would do that work that took the life of his father 21 years ago. But, never say never… Phillips just graduated from the Arlington Fire Academy Recruit Class 78.” [WJLA]

Some Fog This Morning — Updated at 8:55 a.m. — From a National Weather Service tweet last night: “Some patchy dense #fog is developing over portions of central and northern Virginia. Remain alert if traveling overnight, as visibility could quickly fall to a quarter mile or less.” A Dense Fog Advisory is in effect until 10 a.m. [Twitter, Twitter]

Nearby: Downtown D.C. in Trouble — “Now,empty streets are the norm. The COVID-19 pandemic has transformed the District’s once-thriving downtown area into a ghost town over the past nearly eight months… Downtown D.C.s’ economy has been crushed by the pandemic, though it has made a slight recovery since the BID issued its last report in July.” [DCist]