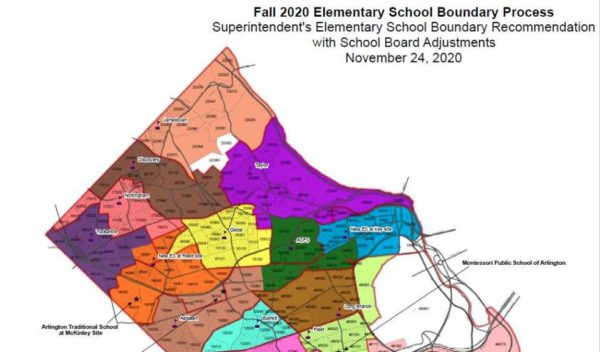 (Updated at 9:45 p.m.) New elementary school boundary changes released last week would relocate more than thousand students and increase the number who can walk to school, according to Arlington Public Schools.

The changes are part of the third boundary proposal that APS released before Thanksgiving. Community members responded to the proposal with mixed reviews in a hearing on Tuesday night, ahead of a planned School Board vote on Thursday.

Incorporating adjustments from the School Board, the new plan reassigns a projected 1,040 students to other neighborhood schools — mostly in the northern half of the county — and adds a projected 650 more walkers, school officials said during the public hearing.

Some students will be eligible to stay at their current school. Tuckahoe students in one planning unit who are reassigned to McKinley can stay until the next boundary process, and all rising fifth-graders at McKinley, Ashlawn, Arlington Science Focus School (ASFS) and Taylor can finish elementary school where they are today, school officials said.

The boundary process, which was initiated to mitigate enrollment increases projected in 2018, was revised twice this fall to lessen the stress on families burdened by the pandemic. The first version would have relocated 1,400 students. In response to parents’ concerns, ranging from further academic disruption to a loss of community, the second version slashed the number moving to 800.

This third version adds some planning units to the new Key school and places all schools within their attendance zones, school officials said. 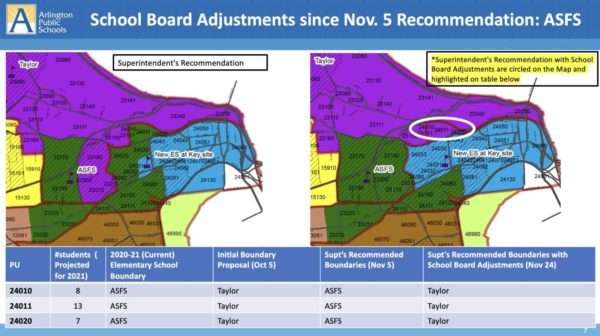 “We can see ASFS from our front door,” she said. “Like many working families, we rely on extended day before- and after-school care, which means we are on the hook for transportation and we don’t benefit from buses. Asking parents, some of whom don’t have a car, to Uber or take a bus with their children twice a day, when we live across the street from ASFS, was really unthinkable.”

APS predicts that ASFS will be at be at 121% capacity, including Pre-K classes, and will need portable classrooms to accommodate the students, which worries other parents. Key could be at 103% capacity in 2023, and might need portables as well.

“This plan puts ASFS significantly overcapacity, when others are significantly under-capacity,” Dima Hakura said. “It is imperative that you reduce the number eligible to attend ASFS and that it operates at capacity.”

To make room for new students at Key, some current students have been rezoned for Taylor.

Anjy Cramer said during the hearing that APS listens to the loudest, most empowered, voices.

“APS led the desegregation of public schools in Virginia, and yet today, our schools are functionally segregated — again,” she said. “These limited changes will only benefit families in Courthouse and Rosslyn.”

Critics of the changes also said the new plan creates overcrowding while APS is seeing a 4% drop in enrollment during the pandemic.

Gillian Burgess said a vote for the changes would put Key, McKinley and Reed at overcapacity. When another, more comprehensive boundary process begins in two years, these schools will either not be included — making it harder to redraw the boundaries — or kids will be forced to move twice.

“Both are bad choices,” she said. “Alternatively, you can just stop. Next fall, one school will be overcapacity, but taking into account some children will remain remote, and ASFS saw a 14% drop in enrollment this year, those projections are unlikely to be accurate.”