“We were really fast going from a ghost kitchen to a store front,” Hardy told ARLnow. “We are going to be looking for a second location, probably, if we can do well through January.”

His pierogi shop — in the former Cucina Al Volo spot inside the Quarter Market food hall — will hold its grand opening tomorrow (Friday). The first 30 customers will receive a 15 Zofia’s Kitchen e-gift card. To promote social distancing, both in-person and delivery orders are eligible.

Hardy blends New York City’s Jewish and Chicago’s Polish flavors with a dash of Old Bay and Southern barbecue to round out the vast geographical expanse that his humble dumplings cover.

Signature pierogies include loaded baked potato, house-cured and smoked pastrami and provolone, crab rangoon, and everything bagel with cream cheese and lox.

For a side, customers can choose from seasonal sides and soups, or try Hardy’s latke doughnut: shredded potato and onion formed into a ring and fried, served with lemon-dill sour cream.

If they still have room for dessert, customers can stick with sweet pierogies, like the seasonal brown sugar-spiked pumpkin “pie-rogi,” or take a break from the dumpling and opt for confections such as truffles or rugelach. 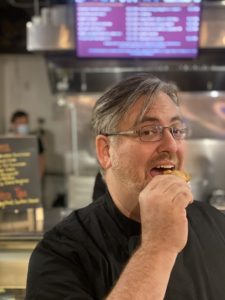 Before coming to Northern Virginia, Hardy had a career in some of New York City’s most famous restaurants. He worked for three Michelin-Starred restaurants, The Modern, Gramercy Tavern, and Aquavit, as well as the comfort food destination Red Rooster Harlem.

Locally, Hardy led the kitchen at Bistro Vivant in McLean and Quench in Rockville, Md. Then he hung up his apron and started driving Bacon N’ Eds food truck.

Hardy was teaching classes at Cookology Culinary School when it shut down and switched to virtual learning due to the pandemic.

He came to pierogies after being asked to cater them for a socially distanced party. It went so well that he and the host, Nate Reynolds, decided to take the idea public.

Hardy went to Cookology to ask if he could operate a ghost kitchen from there, knowing the owner would be on board.

“I think she had advertised that she would be open to being a potential concept incubator,” Hardy said.

By mid-September, Hardy and his team, two former students of his and two other recently laid-off chefs, moved into the ghost kitchen at Cookology. Two and a half weeks ago, they had a soft opening in the Ballston Quarter food court while they prepared the space for the grand opening.

“Honestly, I was surprised by the enthusiastic response to the humble pierogi,” Hardy said. “I think we’ve tapped into a need for another different, yet familiar, comfort food. Zofia’s is like the Polish grandmother you didn’t know you missed.”

For a limited time, Zofia’s is offering three festive platters of pierogis, with flavors inspired by the familiar tastes of Hanukkah, Christmas and New Year’s.

Cooked or frozen pierogies are available for pick-up at Ballston Quarter and for delivery via Postmates on the Zofia’s Kitchen website or through UberEats and DoorDash.