Amazon has unveiled plans for the PenPlace site in the second phase of its $2.5 billion HQ2 in Pentagon City, including a lush office building shaped like a double helix.

The company will build 2.8 million square feet of office space across three 22-story buildings, an amenity building with a community gathering space and daycare center, and three retail pavilions. The focal point will be The Helix: a 350-foot tall spiraling office building that recreates a climb in the Blue Ridge Mountains.

PenPlace will also have three acres of open space with a dog run and a 250-seat amphitheater, for public use.

The tech giant aims to go before the Arlington County Board by the end of 2021, with construction starting in 2022 and ending in 2025, said John Schoettler, Amazon Vice President Global Real Estate and Facilities, during the call. He affirmed that so far, HQ2 remains on-schedule.

PenPlace is bounded by Army Navy Drive, S. Fern Street, 12th Street S. and S. Eads Street. Amazon owns the entire block after it bought a hotel on the site in September. The hotel is currently being torn down.

Schoettler said Arlington County has given Amazon more flexibility for this phase than for the first phase of development on the Metropolitan Park site, which includes two, 22-story concrete office buildings, retail and open space.

“The County Board told us for PenPlace, we really want you to push the envelope,” he said. “It really gave us a clean canvas to try new things.” 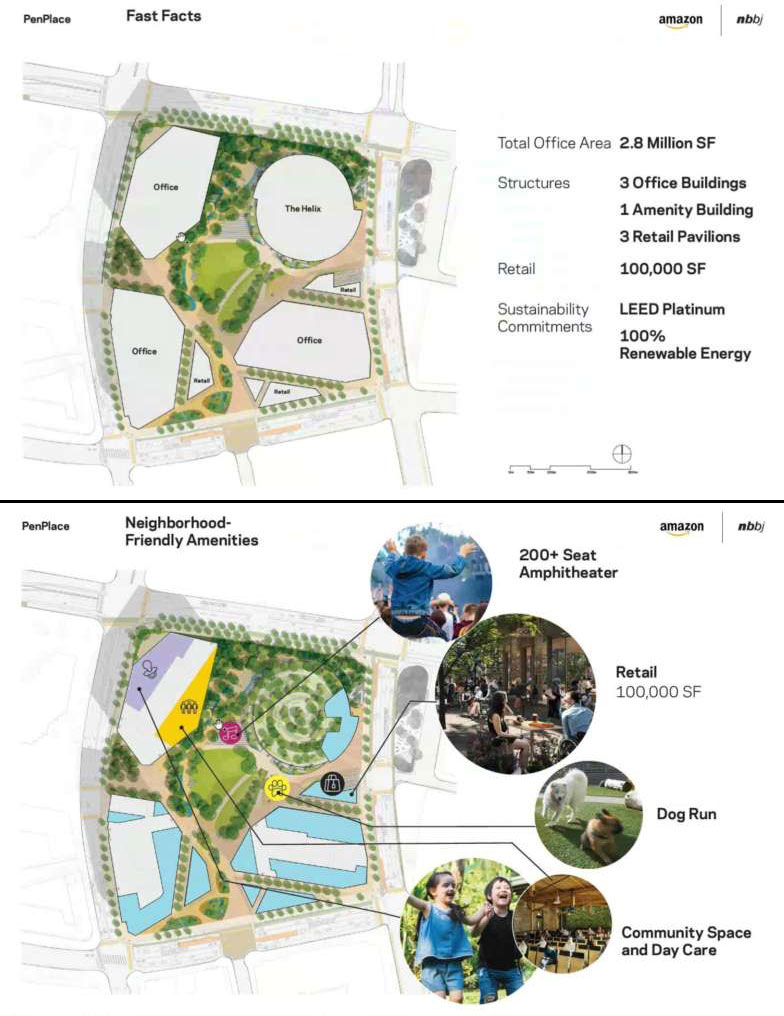 The Helix will be the highlight of the site and the tallest building, said Lead Architect Dale Alberda, who works for the international architecture firm NBBJ and helped to design The Spheres within the company’s Seattle headquarters. Throughout PenPlace, he said, the designs keep employees, who will number 25,000 across HQ2, close to nature and the community.

“Amazon has been challenging us to think about how people can connect to nature not just outside when the weather is good, but inside as well, so that it’s available all day, all the time,” Alberda said.

Schoettler said Amazon is also working hard to use sustainable energy. As part of its goal of LEED Platinum certifications — and to meet its pledge to be carbon neutral by 2040 — the buildings will be powered by a solar farm in southern Virginia.

The headquarters will feature one-quarter mile of new protected bike lanes and more than 950 onsite bike spaces as well as below-ground parking for about 2,100 cars and underground loading zones for trucks. There will also be a new bus platform on 12th Street S. near the main entrance to PenPlace.

Amazon aims to make PenPlace an energetic, 18-hour district that is open to the public and enlivened by local art, including an Artist in Residence program in The Helix, Schoettler said. Local businesses will also be incorporated into the campus.

The Metropolitan Park and PenPlace sites will be connected by a planned pedestrian passageway.

The design reinforces Amazon’s goal of being a good neighbor, Schoettler said.

“These are the areas we call home and it’s very important to us that we do not create an island unto ourselves, but bring people in,” he said.

Meanwhile, progress on Met Park is ongoing and the first building could be completed in 2023.

As for noise, Schoettler predicted fewer disturbances during construction at PenPlace because fewer people live nearby. He commended Clark Construction’s communications with local residents and made assurances that Whiting-Turner, the contractor for this project, will work on community outreach to “make sure we get it right.”

As of December, Amazon has hired more than 1,600 employees and is leasing 850,000 square feet of temporary office space across five buildings in Crystal City.

Amazon’s proposed plans for PenPlace envision a dynamic skyline and present a bold vision for the future of National Landing. We applaud our partners at Amazon for the iconic design of The Helix with its indoor/outdoor experience and biophilic approach which reimagines the workplace and will stand as a beacon of innovation in our district. We appreciate the deep commitment to sustainability and the engaging, people-centered design of a lush, open, and accessible urban campus. The proposed plans are a promising sign for the future of office and underscore the resilience and long-term viability of National Landing as a signature destination for generations to come. We look forward to community conversations around the plans for this transformative site.

END_OF_DOCUMENT_TOKEN_TO_BE_REPLACED

More Stories
Morning NotesArlington Picks Up Another 2+ Inches of Snow