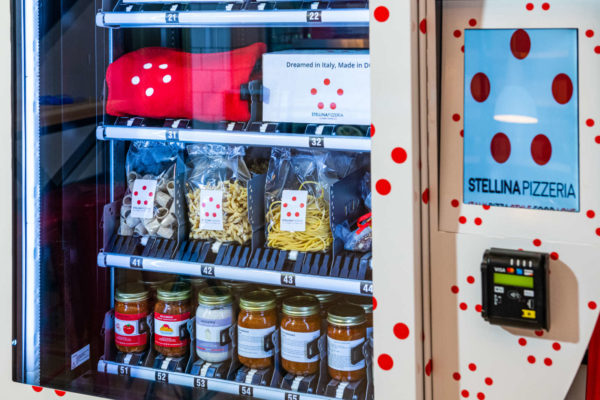 Locals can now buy handmade pasta and sauces from a vending machine outside the future home of Stellina Pizzeria, a soon-to-open Italian restaurant and market in Shirlington.

The machine delivers food in a pandemic-friendly way and helps preview the opening of the restaurant in the former Cafe Pizzaiolo space at 2800 S. Randolph Street, co-owner Antonio Matarazzo said.

The second outpost of the Michelin-recognized pizzeria in D.C.’s Union Market was set to open at the end of 2020, but the holiday season delayed equipment and furniture shipments. It’s now slated to open “in a couple of weeks,” Matarazzo said.

Matarazzo and Chef Matteo Venini, both Italian transplants, got the idea for the vending machine in March. The pandemic had just hit the East Coast, and they were trying to find ways to deliver food to their guests.

“We did not want to just tape up a hole, but do something that could be good for the future,” Matarazzo said.

Granted, he said he has “never seen a pasta vending machine before.”

Like the restaurant, the vending machine was also delayed. It arrived from California — where it was custom-made — a few weeks ago, and six months late.

“It’s a tough time for everybody,” he said. “You have to be more patient these days.”

The machine will stay in Arlington until the end of spring. Then, it will move to 508 K Street NW to preview Stellina’s second location in D.C. Its flagship location opened in April 2019 at 399 Morse Street NE. 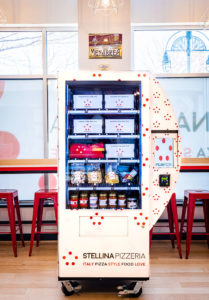 Matarazzo recommends pairing the paccheri — a large, smooth tube-shaped pasta — with a bolognese sauce; the fusilli goes with ragus made with lamb and wild boar; and the tonnarelli pairs with a cacio e pepe sauce, literally, “cheese and pepper” sauce.

“That is a typical sauce from Rome, and a perfect dish for today’s weather,” Matarazzo said, referencing the recent snowfall.

For dessert, people can choose babà al rum, a 400-year-old dessert from France via Naples, or tiramisu. The coffee comes from Ready Set! Coffee Roasters, a Cleveland-based roaster run by some friends.

“This is just the start,” he said. “We’ll see what else we can put in there.”

After the pandemic, Matarazzo plans on installing 10 more in select office buildings.

He keeps tabs on the products through his phone, and said it seems like he has to restock the pasta and sauces “every two minutes.”

“People are excited about it,” he said.

END_OF_DOCUMENT_TOKEN_TO_BE_REPLACED

More Stories
Virginia’s Senators Have “Deep Concern” About Locals Not Getting Mail On TimeCommunity Matters: Do You Really See Me As a Person?