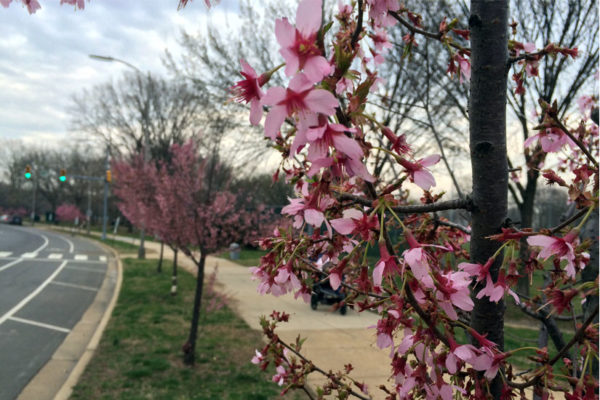 Programming for the 2021 National Cherry Blossom Festival is crossing the Potomac River into National Landing.

The festival, scheduled to run from March 20 through April 11, is springing back this year after it had to cancel or modify most of its events last year due to the coronavirus.

Dozens of cherry trees will be planted in National Landing this spring and the area will feature two “Art in Bloom” sculptures and pink pop-up installations. Some restaurants in the business district are included in the annual “Cherry Picks” restaurant program while residents and local businesses will participate in the “Porch Parade and Petal Procession” — a new addition to the festival.

The inclusion of Pentagon City, Crystal City and Potomac Yard is made possible through a new partnership among the festival, Amazon, the National Landing Business Improvement District and developer JBG Smith.

In November, Amazon was announced to be the new lead sponsor of the 2021 festival, supplanting Japanese airline ANA, which held the position for four years, Washington Business Journal reported. JBG Smith and the BID will be credited as Sakura Circle supporters.

“The National Cherry Blossom Festival is a perfect complement to our work to create a vibrant destination for generations to come that celebrates such rich culture, joy and history,” she said in a statement.

Executive Vice President of JBG Smith Andy Van Horn said he particularly looks forward to the installation of an “Art in Bloom” sculpture at the Crystal City Water Park (1601 Crystal Drive), where it can be enjoyed throughout the festival before planned improvements on the park begin. Working with Amazon and the BID to support the festival in 2021 was a natural fit, he added.

“The partnership highlights the hard work and progress underway to transform National Landing into a vibrant, 18-hour neighborhood brimming with culture, excitement, and unmatched potential,” he said. Another sculpture is planned along the Long Bridge Park Esplanade.

Brooke Oberwetter, Head of External Affairs for Amazon in Arlington, said the company — which is in the midst of building its permanent HQ2 in Pentagon City — looks forward to kicking off its partnership with the festival, JBG Smith and the BID this year, and “building on it in years to come.”

“We could not be more pleased to help bring some of the excitement of the National Cherry Blossom Festival to National Landing,” Oberwetter said in a statement.

This year, the National Parks Service is projecting the blossoms to peak in early April.

Due to the coronavirus, some experiences, including the Opening Ceremony, will be virtual or a hybrid of in-person and online.