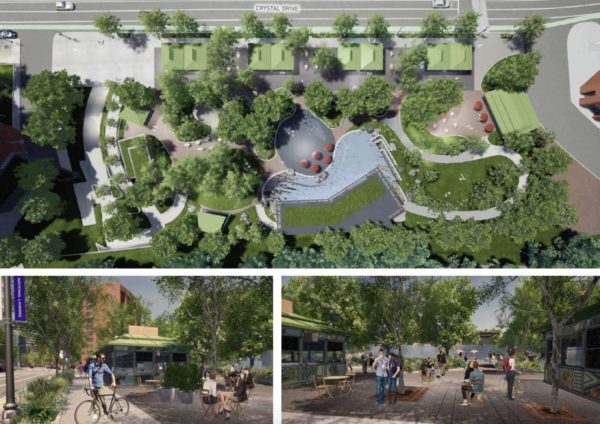 (Updated at 1:30 p.m.) Arlington County has asked JBG Smith to go back to the drawing board after reviewing its plans to upgrade the Crystal City Water Park.

The privately-owned park at 1601 Crystal Drive currently includes water features, trees, and a food stand. It has frequently been used for local events and gatherings.

The project to upgrade it will be deferred two months so that JBG Smith can address pedestrian and cyclist safety concerns raised by Arlington County Board members and community members during the Board’s Tuesday night meeting.

“This is not a fully baked plan yet,” Board member Christian Dorsey said. 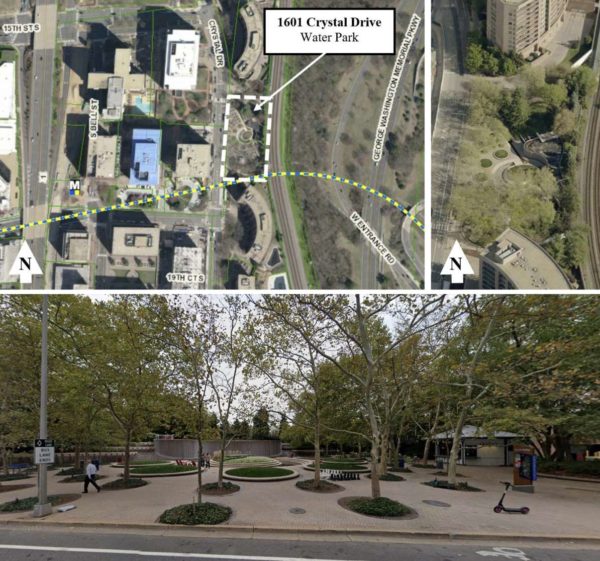 The Bethesda-based real estate company is proposing a new performance area, more outdoor seating, preserving and updating the existing water fountain, and incorporating a new water feature in the center of the site. The proposal also includes a number of retail structures: small kiosks, a bar, and a trailhead restroom facility.

Most of the discussion was devoted to two paths — one ADA-accessible — that JBG Smith proposed to build to connect people to the nearby VRE station and the Mount Vernon Trail. A small pathway linked the two connections.

Community members and County Board members said these paths, as proposed, would create conflicts between pedestrians and bicyclists. People would have to cross the Mount Vernon Trail connector to get to the rest of the park and cyclists would be battling a grade change while avoiding pedestrians.

“We thought we were being helpful, but we’re hearing loudly and clearly that this is scaring people, and we should reconsider it,” said Robin Mosle, a consultant on the project.

The Bethesda-based real estate company opted out of a public design process — something that drew the frustration of some Board members, including Takis Karantonis.

“This would be a conversation that we would have had in the Park and Recreation Commission in advance of the meeting,” Karantonis said.

The County Board is now expected to see the project again when it meets in March.

News of a plan to invigorate the park with new retail dates back at least to 2017, when ARLnow reported that the concession stand in the park had closed. A few months later, The Stand opened in its place, hosting many pop-up eateries. In April, D.C. food truck Peruvian Brothers took it over.