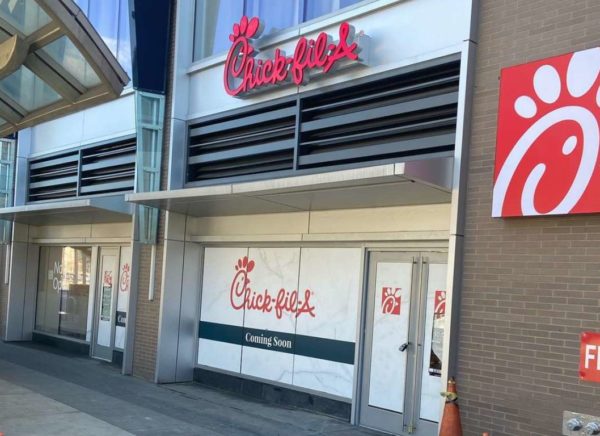 Doors are currently set to open at the chicken nugget and sandwich eatery one week from today, on Thursday, March 11 at 7 a.m.

It’s located on the ground floor of the Whitmer apartment building at the corner of S. Hayes Street and 12th Street S.

The fast food restaurant is right at the top of the Pentagon City Metro escalator on the east side of S. Hayes Street, next to the CVS. It’s also two blocks from Amazon’s future HQ2 and the 25,000 employees it’s expected to bring to the area.

Signs for Chick-fil-A first appeared in July 2019; construction permits were up in the windows a year later. The location now has a webpage and its own Instagram account.

“We are gearing up to open our Pentagon City location very soon and can’t wait to see you!” said a recent Instagram post.

This will be the third Chick-fil-A location in Arlington, joining the locations on Crystal Drive in Crystal City and in Ballston Quarter.

The Crystal City and Pentagon City locations share a common owner, George Demetriades, who took over the Crystal City location in 2015. The new restaurant, one mile away from the first, “expands our reach” in the rapidly redeveloping National Landing area, an employee tells ARLnow.

While the corporate office chooses the locations, operators are allowed to bid and apply to run individual Chick-fil-As, the store employee explained.

Coupons for a free chicken sandwich or biscuit at the new location were recently sent to residents in nearby zip codes. The coupon only is available for redemenation at the Pentagon City location and expires May 31.