A major redevelopment proposal in Rosslyn is facing pushback from those who think it doesn’t do enough for cyclists and pedestrians.

McLean-based Jefferson Apartment Group is proposing a 27-story mixed-use residential complex with 424 units at 1901 N. Moore Street, replacing the 1960s-era RCA building. Two towers will be connected at the top by a penthouse and at the base with ground floor retail.

But as the project moves through the public review process, some have expressed concerns a number of transportation-related issues: the proposed unprotected bike lanes along 19th Street N., the project’s parking ratio, and the pedestrian experience along the block.

These three topics are likely to resurface during a follow-up Site Plan Review Committee meeting on Monday, March 15 — and perhaps later this spring, when the project will go before the Planning Commission and the County Board.

Staff members are considering some protections for the proposed 19th Street bike lanes in response to public input.

“It may be possible to provide an additional level of protection in one direction” on the block from N. Lynn to N. Moore streets, said Principal Planner Dennis Sellin, adding that staffers “don’t see the capacity to do it in both directions.” 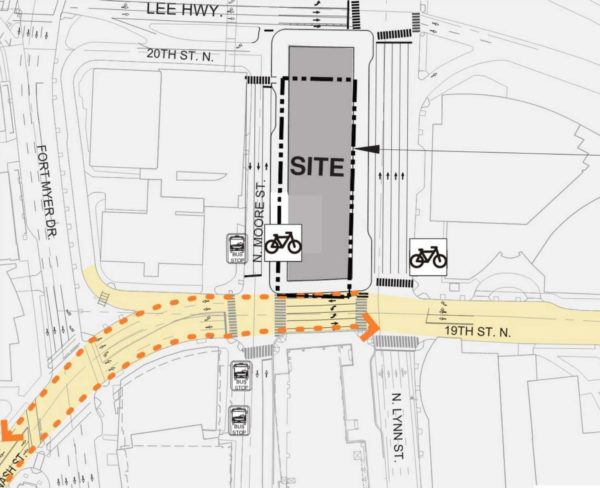 Another hot issue was the parking ratio of .625 spaces per residential unit. Jefferson is proposing 290 total spaces, split among 265 residential spaces, 15 retail and 10 visitor spaces, according to a staff report.

“The goal is to right-size the garage to meet the market demand but not provide extra that incentivizes people to drive,” Painter said.

“You have to understand this is a residential community, not a business community,” she said.

Lowering the ratio would attract people who want to lead a car-free lifestyle, Slatt said, asking for data on space utilization rates. 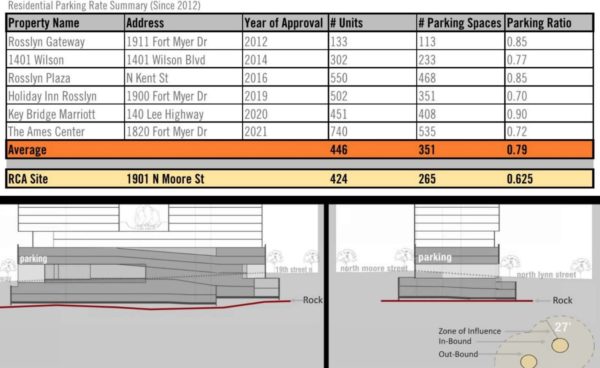 The parking needs to be built partially above ground due to “particularly dense rock” and Metro tunnels. To conceal the parking above the retail and below the residential units — and add public art — the architect is exploring adding graphics by local artists, said architect Shalom Baranes.

It'll take about 3 months to dismantle the existing RCA building. Developer says that's because they're over the Metro tunnels.

"They do frown upon explosions over their tunnels."

As for the pedestrian experience, some members were concerned that the block will be too long and there will be no opportunities for cutting through it. Sellin said the block is comparable to others at 400 feet long.

SPRC Chair Sara Steinberger said knowing the length “may not change the community’s feelings on what feels like a longer stretch of block when you have large buildings covering a greater area.”

In 2017, Weissberg Investment Corp., which developed the RCA building in the 1960s, filed plans to redevelop the RCA site — but those plans were put on hold indefinitely in 2018. Jefferson started filing application materials in May 2020.

END_OF_DOCUMENT_TOKEN_TO_BE_REPLACED

More Stories
Local Staple Delhi Dhaba is Donating Percentage of Proceeds to Indian FarmersHealth Matters: What to Expect After Getting the COVID-19 Vaccine