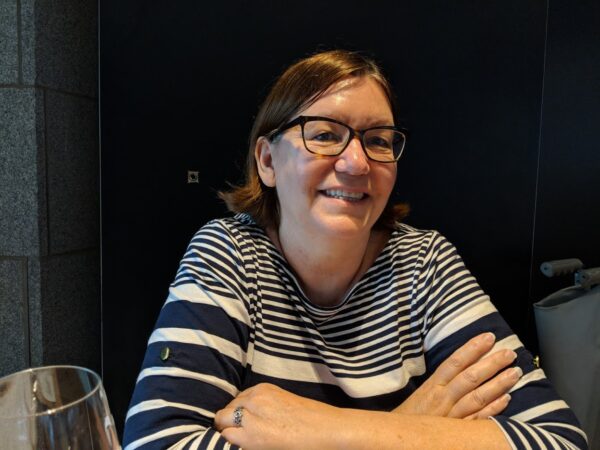 Arlington County Board Communications Manager Mary Curtius was a journalist when the reporters wrote drunk and sometimes edited sober, and when the editors ashed their cigarettes on reporters’ desks if they were lucky.

She started writing when “cut-and-paste” literally meant cutting sections of type out and sticking paragraphs together with rubber cement glue.

“We probably went home high every day, we were inhaling so much rubber cement,” she said. (On that note, the photographers, stuck in dark rooms all day, were probably loopy from the developer and fixer chemicals.)

Curtius reported from Los Angeles, Jerusalem and Capitol Hill. She was the Middle East bureau chief for the Boston Globe and Christian Science Monitor. She covered Congress for the LA Times and before that was the paper’s National Security Editor. To have more time with her kids, she switched tracks 11 years ago and started handling communications for Arlington County.

Today is Curtius’ last day as Communications Manager for the County Board before she retires. After five decades of working — she started cleaning homes at 13 — she says she looks forward to visiting friends and family now that she is fully vaccinated, traveling and volunteering. And rest. She looks forward to rest.

“I don’t think there are a lot of people who can say they never had a bad job and never got to do anything fun,” she said. “I’m lucky. I’m really lucky. It’s been a great ride.”

And sometimes, the ride was dangerous. She remembers taking a road trip out of Jerusalem with two male reporters, and when she got into the car, she saw they were working through a bottle of whisky. The two polished it off over the five-hour drive.

“It was completely terrifying,” she said. “That was how they lived… I was always ‘the good girl.'”

She had to be, to get ahead in a male-dominated field.

But her distinguished journalism career took a toll on her family life. So Curtius joined the county 11 years ago to be home more with her kids. During her tenure, Curtius said the changing media landscape and the dawn of social media caused her job to morph too. She has been part of a few major crises — Snowmageddon and the Derecho storm and now the coronavirus — and has helped Arlington prepare for Amazon’s arrival.

Curtius remembers spending 18 months documenting how Arlington transformed from a sleepy town to a bedroom community for Pentagon workers to a bustling metropolitan area. She found all the Board members and county managers who were still alive and put together plans in the 60s and 70s to accommodate the Metro and concentrate development around stations.

“That video captured the ‘Greatest Generation’ — people who had these ideas and laid the foundation of modern Arlington,” she said. “I really enjoyed meeting those people. Almost all of them are dead now.”

Over the last decade, she said local media coverage has waned. Before joining the County Board in 2006, she said TV stations would set up cameras to get clips from County Board meetings. No longer, except for major news like Amazon’s arrival.

“It seems incredible to think about that,” she said.

Since then, the Washington Post has pulled back on local coverage, and there are not as many news outlets focused on county government — the Sun Gazette and present company excluded, she added.

“Of course, it is happening across the country,” she said. “It’s really distressing, just as a reporter, that there’s not a lot of local coverage.”

In her first job, she went to the police department every day to go over the police blotter. A reporter went to every city council meeting.

“There was an oversight that is unthinkable now,” she said. “Back then, newspapers were incredibly rich. They had huge staff that they paid very badly. They could do a lot.”

Curtius said she maintained a “mad commitment” to producing multiple press releases from County Board meetings because it is sometimes the county’s only chance to get news about certain Board actions out there.

And as local coverage scaled back, social media rose up in its place, leading to an expectation that elected officials be ultra-responsive to constituents, she said.

“Everything is instantaneous: People have an expectation of high-touch responsiveness on all parts of county government,” she said. “I think that’s both good and kind of exhausting for everyone involved.”

The Arlington Way has also become more intense, complex and time-consuming, she said.

“You’re expected to reach people in more ways. I think that has broadened the conversation, which is a very good thing, but it also means things take longer than they used to because you do need to have a broader, longer, deeper conversation,” she said.

But these conversations are hard because there is a lot at stake.

“Arlington is grappling with what it wants to be in the future,” Curtius said.

Read more →
More Stories
Listing of the Day: 1730 Arlington Blvd #507Your Beermonger: What You Need to Know About Cooking With Beer