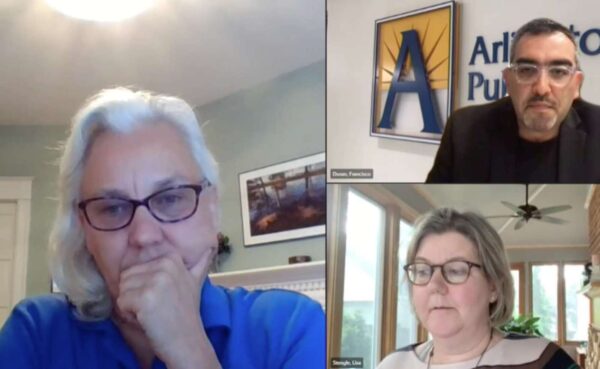 About 2,000 students who left Arlington Public Schools after buildings shuttered in March 2020 have indicated they will not be returning this fall, according to APS staff.

This enrollment information — which could alter the budget for the 2021-2022 school year — landed in the laps of the Arlington School Board and school administrators during a budget work session Tuesday evening.

The problem? School Board members are slated to vote on the $700 million budget tomorrow (Thursday) and APS administrators say they do not have enough time to draw meaningful conclusions about how the budget will be impacted.

During the work session, however, School Board members asked staff to try anyway. They said recalibrating the budget for 2,000 fewer children could knock down the $11-$15 million budget deficit that APS is facing and could determine how the board votes to compensate staff.

(Since the School Board adopted a proposed budget in early April, which then included a $14.9 million deficit, Superintendent Francisco Durán and board members have proposed changes lowering the deficit to $11 million.)

“Our budget is funding for at least some students who we assumed would be part of our enrollment who are not,” Vice Chair Barbara Kanninen said. “We can’t not do anything with this information. I don’t know how we’re going to pull it off that quickly, but we have to: We owe it to the taxpayers of Arlington and we owe it to our staff, not to lowball them on compensation because we couldn’t figure out where the students will be.”

Durán cautioned against using the information to cut down on staffing without knowing more information. He vowed to provide more details tomorrow.

“We still need a deeper analysis to understand what the implications are,” he said.

APS previously projected 29,653 students would be enrolled in the school system next year. On multiple occasions, staff members have said they calculated the increase based on numbers from 2019, as 2020 was too irregular of a year given the pandemic.

But Lisa Stengle, Executive Director of Planning & Evaluation for APS, said the new survey responses are just one piece in a bigger puzzle of figuring out what next school year’s enrollment will look like.

“This number is about students who left, but we also have the intent-to-return surveys, we have new families not counted in this, and five years ago, we had the largest number of births to Arlington parents in quite a period of time,” Stengle said. “There are a lot of other factors. We need time to work all of those through. This is trying to estimate human behavior in a pandemic that we don’t have patterns for.”

Board member Reid Goldstein, however, said it is public knowledge at this point that members of the board believe 29,653 students is an overestimation. During the budget process, board members asked APS to calculate the savings if enrollment dropped to 28,500 students; staff said APS would save $5.9 million under such a scenario.

“This new information about 2,000 students planning not to come back is really giving me a lot of heartburn, given the budget that’s a day and a half away,” he said.

Kanninen brought up the enrollment news halfway through the meeting, which, up until then, had included a lengthy discussion on the myriad employee compensation plans the board will have to choose from.

Taking into account one compensation plan and the several million dollars in new budget cuts, APS faces an $11 million budget deficit. Meanwhile, a plan that provides a 1.5% cost of living increase at the start of the year — favored by a number of APS teachers and staff — would increase the deficit to $13.9 million.

Another option would provide a state-recommended 2% cost of living increase to all staff and would make APS eligible for $657,783 in state funding. Some School Board members said they want to take advantage of this funding and supported this option which would increase the deficit to nearly $16 million.

Board member David Priddy said by his math, the enrollment drop would save APS $8.3 million, and would cover any of the compensation plans.

“I think that we should pursue that,” he said.