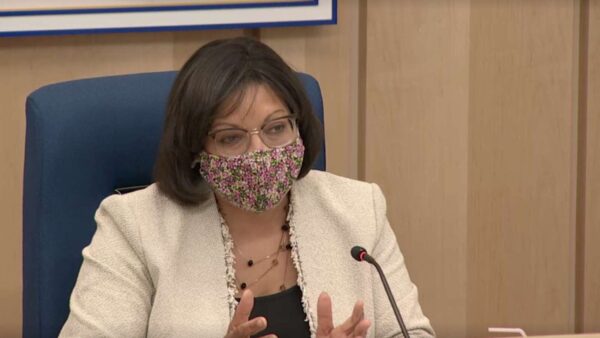 These funds will support both full-time in-person instruction and a distance education option for Arlington Public Schools students this coming fall and next spring. More than 24,000 students are projected to be in-person this August, according to APS.

The budget was pieced together with an ongoing county transfer of $527 million, a one-time transfer of $2.8 million, $3.5 million in carry-over funds from the 2020-21 school year, state and federal funding, and the use of $19.5 million in reserves. It is enough to keep APS in the black in the short term, according to Board Vice Chair Barbara Kanninen.

“This budget is going to be balanced, but going forward, we are carrying a deficit into next year,” she said.

It also takes into account lower enrollment than initially expected for the next school year, which was revealed just two days before the meeting.

When news dropped on Tuesday that about 2,000 students who left APS over the last year will not be returning, School Board members asked the school system to adjust the budget for reduced enrollment, expressing hope that it would help resolve a looming $11 million budget deficit.

After consulting with an enrollment expert, APS administrators offered an alternative budget that estimated 525 fewer students. The School Board voted 4-1 — with board member Reid Goldstein dissenting — to account for the more conservative projected reduction in enrollment. (Goldstein said he believed APS could make deeper reductions.)

“To provide any larger of a reduction would give a much greater weight to the 2020 enrollment than [the expert] felt would be practicable because this year is an anomaly,” said Leslie Peterson, Assistant Superintendent of Finance and Management Services.

This change to the budget saved the school system nearly $3.5 million, or nearly 37 full-time employees that APS would otherwise need to hire. APS is setting aside $500,000 of that savings to hire more staff if real enrollment is higher this fall.

“I believe this puts us in the situation of, I hope, almost similar to a freeze so that we are able to keep the current staff as much as we can in the building,” Board Chair Monique O’Grady said. “This will have an impact on hiring additional staff, but hopefully, we can keep current staff in place while saving us dollars in the middle of a tight budget scenario.”

Superintendent Francisco Durán, the outside enrollment expert and administrators did not support the lower enrollment projection, which they said does not account for high birth rates in Arlington in 2016 — children that are coming of elementary school age — or an increase in housing, among other factors included in enrollment projections.

With the new budget, the school system will be be increasing classroom sizes by one student for grades K-5, saving APS $1.8 million and the equivalent of hiring nearly 21 full-time employees.

In response to concerns from a handful of parents, the School Board used reserve funds to restore $85,000 in the budget, nixing a proposal to remove one copier from each school. The parents, Kanninen said, were concerned that fewer copiers would mean less pencil-and-paper work and more screen time.

“Even before the pandemic, we were making transitions to digital learning materials and other manipulatives to help students grasp concepts,” said Bridget Loft, Assistant Superintendent for Teaching and Learning. “While there would be some impact, the expectation is it would not be catastrophic or a game-changer, particularly since we’ve been engaged in moving in a different direction away from paper-based materials.”

Only Goldstein voted against the amendment, saying that he believes staff when they say it will not impact instruction.

Finally, the board unanimously supported reintroducing a 2% cost of living adjustment for all staff that had been taken out of the budget the board adopted in April. Staff will now receive the 2% adjustment at the start of the year and a salary increase midway through the year. Certain staff will receive an additional increase midway through the year.

This option — paid for with reserve funding — is eligible for more than $600,000 in state aid. The salary and cost-of-living boosts come as most staff are expected to be in-person this fall. Almost 95% of students intend to be in-person, according to APS.

About 5%, or 1,290 students, will be fully distant. About 17%, or 4,421 students, did not respond to the survey, which automatically registered them for in-person learning. 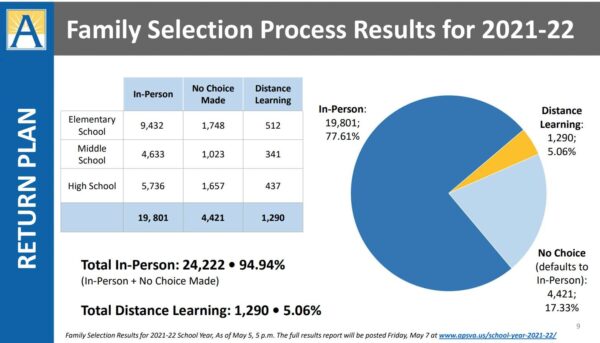 The board has already switched gears to hammering out the details of a proposed Capital Improvement Plan (CIP) for the 2022-24 fiscal years.

The plan includes major infrastructure projects, such as HVAC system replacements, air quality improvements and new turf fields, as well as money to support the future expansion of the Arlington Career Center.

The board will meet tomorrow (Tuesday) at 6 p.m. to discuss the CIP.