Arlington-based Shooshan Company is looking to redevelop the mid-century Days Inn Motel across the street from the Joint Base Myer-Henderson Hall.

The site, at the intersection Arlington Blvd and N. Pershing Drive, has development potential as “the de facto neighborhood gateway,” wrote Jonathan Kinney and Matthew Roberts, land-use lawyers representing Shooshan, in a letter to the county.

Shooshan set its sights on the motel in 2019.

“The hotel is nearing the end of its useful life and is increasingly becoming functionally obsolete,” the lawyers said.

If redeveloped, most of the hotel would be torn down to make way for a mixed-use development that will likely include apartments, townhouses and retail, with open space and underground parking

But making these changes require a study of the site and surroundings to see what level of development would be appropriate, a study that just concluded. The resulting Pershing Drive Special General Land Use Plan study views the land as a “highly visible gateway node” that can support higher density and provide needed open space and trail connections, meaning Shooshan may soon be able to take the next steps toward redevelopment.

“The amendment is critically important to the effective redevelopment of the site and completion of the ‘gateway’ entrance into the Lyon Park neighborhood,” a report on the study said.

This study recommends rezoning the land for office, apartment and hotel use with a maximum height of eight stories or 90 feet along Arlington Blvd, with shorter maximum heights of three to six stories, or maximums of 50 to 70 feet, where the building transitions into nearby apartments and single-family homes. The document envisions a building with all-underground parking, “welcoming” ground floor retail and open space. 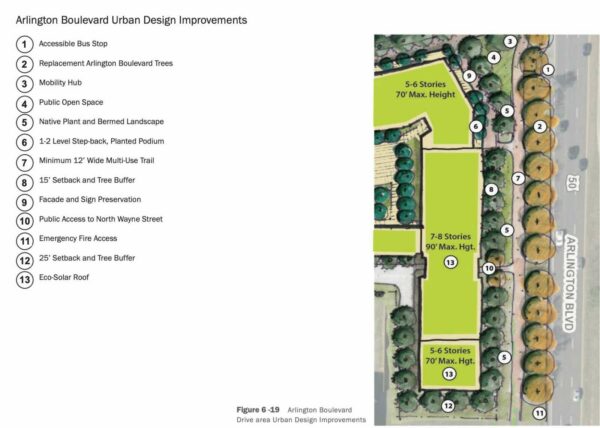 The open space would be on the northwest corner, along N. Pershing Drive. Along the southern edge, where the hotel faces the Washington & Lee Apartments, the document recommends the site should “present an inviting façade with three to four-story buildings, individual entrances, trees and landscaping…rather than turning its back on its neighbors.”

This area will have a shared street that pedestrians and bicyclists can use to access the Arlington Blvd Trail. 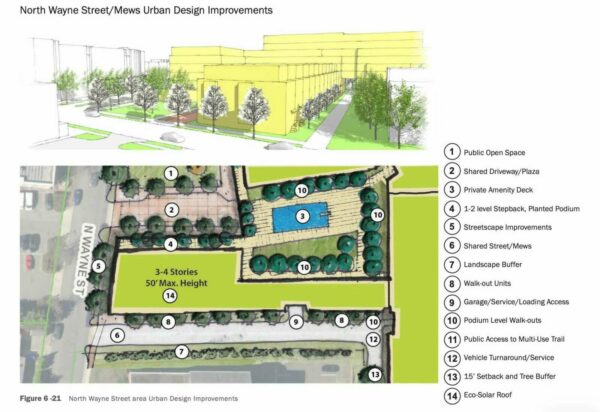 The study also recommends preserving the sign and lobby, described as iconic examples of mid-century modern design, and incorporating them somehow into the redevelopment. Before becoming a Days Inn, the hotel was called ARVA Motor Hotel, a name created by blending together “Arlington” and “Virginia.”

“The original shape and design of the blade sign should be rehabilitated to capitalize on this unique community landmark, while allowing for the sign to be reused to advertise the name of the new development, business, etc.,” the document said. “The lobby area could, in fact, serve as a trail-oriented retail space or cafe.”

Overall, according to the staff report, participants during a community engagement process — mostly neighbors — said they are in favor of redevelopment and reinvestment along this segment of Arlington Blvd, preferably with new apartments, restaurants and retail. Respondents to a survey stressed the importance of a casual-use open space, connections to the Arlington Blvd Trail nearby, more tree canopy and better sidewalks.

“There is general support for the recommendations outlined in the Study Document among Long Range Planning Committee and community members,” the report said.

This Saturday, the County Board is set to decide whether to approve future public hearings to consider adopting the special study and to consider changing the zoning of the site, per the study’s recommendations. The adoption of the document could come on July 17 or 20.

END_OF_DOCUMENT_TOKEN_TO_BE_REPLACED

More Stories
Statutes of Liberty: An Asylum Case From Two Perspectives — The Lawyer and the ClientAnti-ICE Protest Planned at County Government HQ This Afternoon