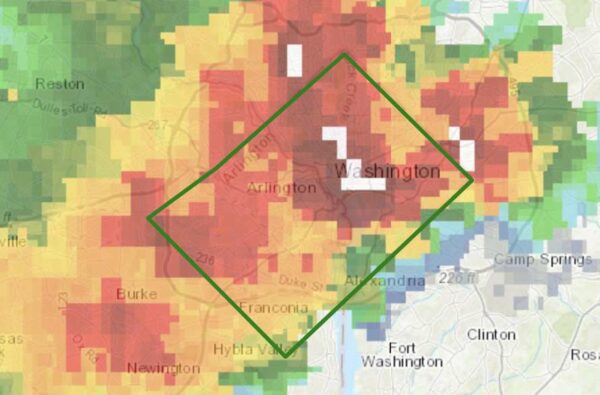 Update at 4:15 p.m. — The earlier severe thunderstorm watch and warning have both been cancelled.

Update at 3:40 p.m. — Just over 1,400 Dominion customers in Arlington are without power, according to preliminary numbers from the power company’s website.

Update at 3:30 p.m. — A 58 mph wind gust was recorded at Reagan National Airport, according to the National Weather Service. Some downed trees and power outages are being reported around Arlington as the storm dies down.

Update at 3:20 p.m. — A Flash Flood Warning has been issued amid ongoing heavy rains. From NWS:

* AT 314 PM EDT, DOPPLER RADAR INDICATED THUNDERSTORMS PRODUCING HEAVY RAIN ACROSS THE WARNED AREA. BETWEEN 0.5 AND 1 INCH OF RAIN HAS FALLEN. ADDITIONAL RAINFALL AMOUNTS OF 1 TO 2 INCHES ARE POSSIBLE IN THE WARNED AREA. FLASH FLOODING IS ONGOING OR EXPECTED TO BEGIN SHORTLY.

Update at 2:55 p.m. — Arlington is now under a Severe Thunderstorm Warning. Take cover!

Update at 12:45 p.m. — A Severe Thunderstorm Watch has now been issued for the region.

A severe thunderstorm watch has been issued for parts of DE, DC, MD, NJ, PA, VA until 8 PM EDT pic.twitter.com/sOkYmuP7Kr

The National Weather Service has issued a Flash Flood Watch for Arlington and other parts of the region, starting at 2 p.m. and running through Friday morning. Forecasters are also warning that storms may pack damaging winds in addition to downpours.

* From 2 PM EDT this afternoon through Friday morning.

* Several rounds of thunderstorms are expected this afternoon through early Friday morning with localized rainfall rates of up to 1-2 inches per hour possible. Total rainfall amounts of 1-3 inches, with locally higher amounts up to 4 inches are possible.

A Flash Flood Watch has been issued from Thursday Afternoon through Friday morning for counties east of the Blue Ridge. Showers and thunderstorms can produce heavy rainfall leading to flash flooding. #MDwx #VAwx #DCwx #WVwx pic.twitter.com/iVbjd7JMgD

An active weather day across this region with multiple rounds of showers/thunderstorms expected. Portions of the area are in a Slight Risk for severe thunderstorms, while others are in a Flash Flood Watch. Stay weather ready and be prepared to take shelter if a storm approaches. pic.twitter.com/wkhbMWRKo9

A Slight risk of severe storms is forecast for late this morning into the afternoon in portions of the Mid-Atlantic. Damaging winds will be the primary hazard. More details and forecast updates: https://t.co/QMmU4tkoeT pic.twitter.com/eHAUTtbLZP

END_OF_DOCUMENT_TOKEN_TO_BE_REPLACED

More Stories
Morning Poll: Marijuana Is Now Legal in Virginia, Does That Change Anything For You?Amazon Will Pay HQ2 Employees to Bike to Work