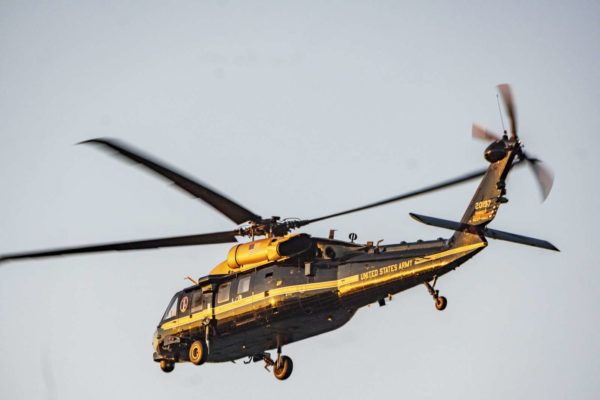 Reducing local helicopter noise while conducting missions safely may be difficult, the Pentagon says, but the military is willing to try, according to a new report.

The commitment and the recommendations conclude a Dept. of Defense report on the causes and effects of helicopter noise in the D.C. area. This document was completed as a result of Rep. Don Beyer’s amendment to the National Defense Authorization Act, which included noise mitigation recommendations that Beyer and other regional lawmakers have sought for years in response to constituent complaints.

“The recommendations in this report reflect priorities my constituents have sought for years to reduce helicopter noise in Northern Virginia, and would make a real difference across the region,” Beyer said. “In particular, the commitment from DoD to study the possibility of increasing altitudes of helicopter routes would be a real game changer.”

The other action items would help reduce noise and improve transparency and engagement with the community, he said.

“I thank the Department of Defense for undertaking and releasing this report, and urge the rapid implementation of these recommendations,” Beyer said.

Residents of certain Arlington neighborhoods have lived with helicopter noise for many years, and it is a thorny issue among them. Previous discussions around noise mitigation ended in a stalemate, as officials say agencies have to also consider safety, which includes avoiding the abundance of commercial airplanes in the region.

There are more than 50 helicopter operators in the area and the biggest contributor is the Army, followed by the Marine Corps. The Army, Marine Corps and Air Force combined conducted 21,863 operations — although that does not translate to 21,863 flights. About eight flights per day used the Pentagon helipad, which is limited to only DoD-directed exercises and three- and four-star executive –and civilian equivalent — travel.

This new report finds that the flights currently occurring at levels “considered acceptable” based on Army, DoD, and federal land use compatibility recommendations. It did acknowledge, however, that studies find helicopter noise is “much more variable and complex” than airplane noise.

One notable recommendation is that DoD will discuss the possibility of increasing altitudes of helicopter routes with the Federal Aviation Administration.

“The airspace within the [National Capital Region] is one of the busiest and most restrictive in the United States,” the report said. “The military helicopters that operate within the NCR are sharing airspace with three major commercial airports and are required to follow the helicopter routes and altitude restrictions established and enforced by FAA.”

And a majority of helicopter operators have expressed concern that changing the altitude could reduce safety for all aircrafts, saying that “establishing quiet or restricted zones would negatively affect their mission.”

DoD said it will also work with FAA to obtain flight track data trends to look at compliance with local flight procedures and helicopter routes, and address any potential corrective actions. Finally, DoD said it will work with the Army and Marine Corps to ensure “fly neighborly” and “fly friendly” procedures are being reinforced and examine the procedures currently being used.