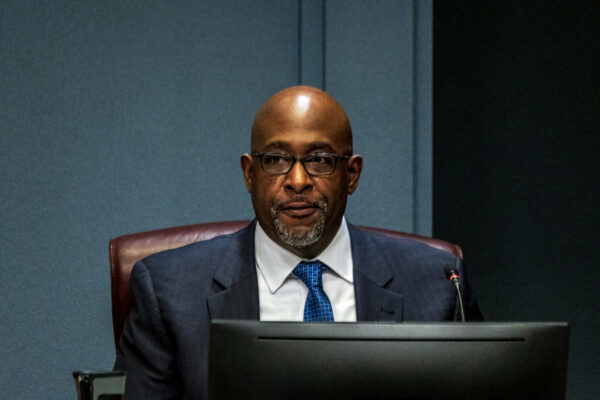 After initially failing to garner enough votes from the regional Transportation Planning Board, a controversial project to widen I-270 in Maryland and replace the American Legion Bridge is back on.

And Arlington County Board Member Christian Dorsey, who sits on the regional board, was one of the leaders who flipped his vote from a ‘no’ to a ‘yes.’

Dorsey appeared on WAMU’s The Politics Hour with Kojo Nnamdi on Friday to talk about why he flipped his vote. Dorsey also explained the powers and limitations of the newly created Community Oversight Board, which provides oversight over the conduct of officers in the Arlington County Police Department.

Maryland Gov. Larry Hogan’s signature project would add two high-occupancy toll lanes in each direction to part of its Beltway and lower I-270. The toll system would connect with Northern Virginia’s toll lanes on I-495 and 395.

Supporters say the project will relieve intense bottleneck, but in June, Dorsey said it was “not ready for prime time,” according to the show. In the interim month, the project was revised and Hogan’s team reportedly spent significant time lobbying those who voted ‘no.’ The board voted 28-10 in favor of the project.

Dorsey said his vote hinged on funding for public transit, as lower congestion could encourage more single-occupancy vehicle traffic. He denied being contacted by Hogan’s office, but said he was contacted by “targeted campaigns.”

“What was missing was a commitment to provide the funding to make sure locally-developed transit solutions could be developed, and could be constructed and operated in the long term,” he said.

“There was significant progress  — at least enough progress for me to move it along in the regional planning process,” Dorsey said.

The Maryland Board of Public Works is set to vote on the project later this summer, according to the show.

Dorsey also clarified the roles of the Community Oversight Board, which has investigative and subpoena power. The board will have an independent policing auditor who can conduct an investigation alongside one being conducted internally by ACPD.

“If for some reason in that concurrent [model], which we think is artfully designed, records are withheld, it has ability to get them via subpoena,” he said. “We hope it’s rarely used, as that means the concurrent model not working.”

(The Arlington branch of the NAACP has criticized the County Board for not granting the oversight board the full powers recently granted by the state legislature.)

Since County Manager Mark Schwartz hires staff, including police officers, a Community Oversight Board with county staff would not be effectively independent, Dorsey said. The solution was to create an independent policing auditor who is accountable to the oversight board and who ensures investigations take place.

The Board voted against a provision setting aside three seats on the oversight board for people of color or people from marginalized groups.

“This is not about saying there shouldn’t be three people of color on the board, but that we shouldn’t send a signal that three is somehow an acceptable minimum,” Dorsey said. “Most [members] should be people of color, from my perspective.”

Dorsey said he does not deny that ACPD has had occasional issues worthy of scrutiny, but “overall, we’ve had a professional and effective and trustworthy police department.”