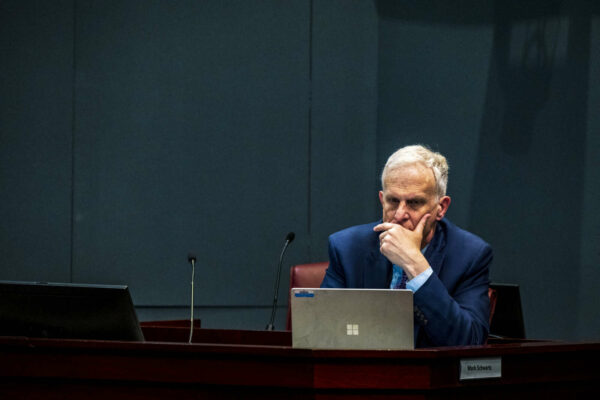 County Manager Mark Schwartz is proposing to use leftover money from the most recent fiscal year and federal COVID-19 relief for priorities such as employee bonuses and investments in disadvantaged communities.

He presented his plans to the Arlington County Board Tuesday night.

The county has $20.5 million in unspent, unencumbered “closeout” funds from the 2020-2021 fiscal year, which ended in July. Arlington also has about $17 million in unspent American Rescue Plan Act funding and $23 million more in expected funds for which to plan.

Some of the budget surplus will go toward employee salary adjustments and retention bonuses, while the federal funding from the American Rescue Plan Act (ARPA) will support new initiatives, some of which are one-time and some that will eventually switch to ongoing local funding.

In years past, some have scrutinized Arlington’s surplus, or “closeout” funds, as being excessive — a product of conservative budgeting that enables a de facto slush fund, divvied up outside of the normal budget process, at the end of most fiscal years. Critics have also questioned the county’s spending plans for allocating most of the surplus, rather than setting it aside to avoid tax increases.

Schwartz attributes the 2021 surplus to the moving target of planning during a pandemic: over-budgeting healthcare costs and departmental operations, which slowed down due to COVID-19, while underestimating tax revenue.

And rather than allocate most of it, this year, he’s proposing to put about $16.6 million toward the 2023 budget to address priorities such as housing and restorative justice.

He will spend nearly $2 million in retention bonuses for police and emergency services health employees, and $174,000 to match state funding for bonuses for the Sheriff’s Office. On Tuesday, the County Board changed the funding source from ARPA funding to the surplus, county spokeswoman Erika Moore said.

The retention bonuses respond to reports of police and clinicians quitting their county jobs over grueling overtime and a demanding mental health crisis response. The situation worsened over the summer when the state closed five of its eight psychiatric hospitals, which were suffering from understaffing and becoming dangerous places to work. Department leaders say employees leave for more competitive, less taxing private-sector roles, such as security jobs at Amazon and private-practice clinical work.

“I appreciate the County Board taking action tonight to allocate retention bonuses, which will include a $3,500 one-time payment for police and emergency services health employees,” Schwartz said in a county press release. “It has been extremely difficult to retain and hire qualified staff for these positions at a time when demand for services is exceptionally high with extreme risk to our community if left unfilled.

Now, the plan will go to the public for review. The Board will hold a hearing on the spending plan at its Nov. 13 meeting, followed by a vote.

In addition to the $20.5 million, the county ended the year with $284.9 million in unspent, allocated money in its coffers. The rest of the fund balance breaks down as follows:

This spring, the county received the first installment of $23 million from the federal government, spending $3.8 million to restore proposed budget cuts and allocating the remaining $19 million toward COVID-19 relief. Now, Schwartz proposes reducing that allocated sum to $6 million, which will fund testing sites, contact tracing and vaccine clinics through next summer, and finding other ways to spend the rest.

In total, Schwartz has a plan for spending $16.5 million of the first installment, including what has already been spent.

“There’s a lot of innovation in here,” Board Member Libby Garvey said Tuesday night. “Most budgets, there are new programs that you put in, and we haven’t been able to do that. But with ARPA, we can.”

Schwartz is recommending using $22.1 million in ARPA funding for the estimated future costs of the recommended programs through the 2024 fiscal year, leaving $7.4 million in unallocated funds.

The programs, as described in the press release, are as follows:

The County Board also heard Schwartz’s budget guidance for the 2023 fiscal year, planning for which is underway. He emphasized the need to increase employee compensation — something Schwartz says he has not been able to do these last two years.

More from the release:

During their October Board meeting, the County Board also issued guidance to the Manager for the FY 2023 budget that is consistent with the equity resolution, responsive to the health and safety needs of the community, and recognizes the dedication of County employees.

The County Board members expressed their sincere appreciation for employees and their public service to Arlington County. They also signaled strong support for the Manager to include increased compensation for employees during the FY 2023 budget process.

We value County employees who have been working under very difficult circumstances to step up and serve our community,” stated County Board Chair Matt de Ferranti. “The County Board guidance adopted today is intended to combat COVID, and invest in affordable housing, our public schools, economic recovery and environmental sustainability. As we balance these important priorities, we will also be considering additional steps to further compensate our greatest resource — our employees.”

The Board also directed the Manager to propose a balanced budget that includes continued implementation of collective bargaining and the Police Practices Group recommendations, as well as strategies to address stormwater challenges and a “whole of government” approach to climate change.