The new preliminary concept plan for Langston Blvd envisions the corridor’s transformation over several decades into a “Green Main Street.”

The extensive plan — which has been in the works for years — calls for land use changes along the former Lee Highway, with the aim of encouraging re-development over time, though the proposed zoning changes are not quite as drastic as what had been discussed last year.

“The new recommended building heights are generally two to three stories lower than were considered in the 2021 [Land Use Scenario Analysis],” said the plan, a 135-page document filled with small text and large renderings. “While it may take longer to implement the vision and improvements along Langston Boulevard may happen intermittently, the plan provides options for property owners to execute the plan’s vision and recommendations.”

Should the vision be realized, the corridor’s ubiquitous, aging strip malls and large surface parking lots would be replaced with taller, more walkable hubs of social and economic activity. 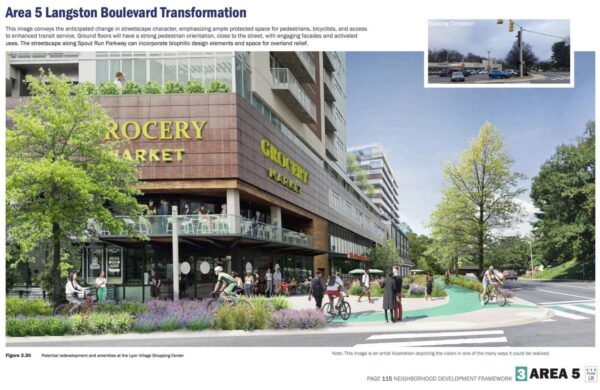 The Lyon Village Shopping Center could be turned into a 12-15 story mixed-use development, with the current Giant grocery store and The Italian Store on the ground floor, looking out on a bike path that connects to the Custis Trail and a reconfigured intersection of Langston Blvd, N. Kirkwood Road and Spout Run Parkway. 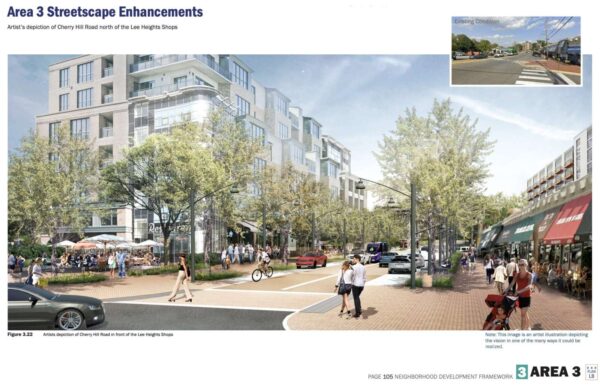 The Lee Heights Shops, home to Arrowine and Pastries by Randolph, may remain largely as-is, but with mixed-use developments of up to seven stories and pedestrian promenades around it. 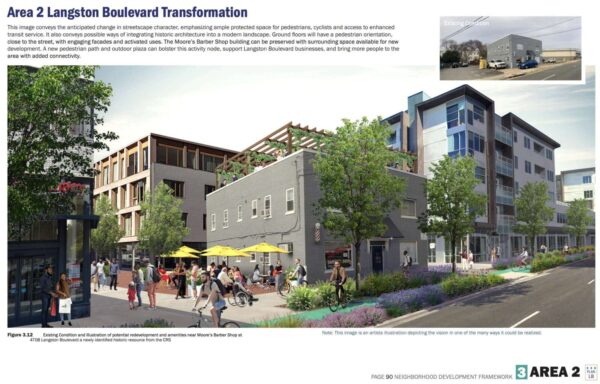 Another nearby landmark, Moore’s Barber Shop, could also remain in its current building, but next to a five-story apartment building an an outdoor cafe, rather than parking lots and a car care center. Across the street, however, the McDonald’s could make way for a new public school and other public infrastructure, alongside a renovated Langston-Brown Community Center. 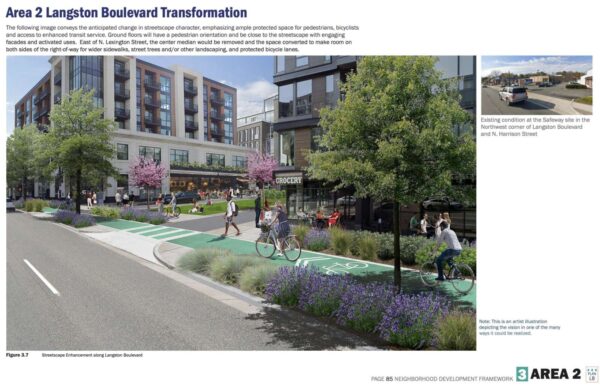 Further down the road, the busy shopping centers surrounding the intersection of Langston Blvd and N. Harrison Street — currently anchored by Harris Teeter and Safeway grocery stores — could become mixed-use centers of housing and ground-floor retail, up to 7 stories.

In addition to the current mix of restaurants, grocery stores and other businesses, the plan calls for other types of commercial tenants, including coworking spaces, fitness centers, hotels, and childcare providers.

Langston Blvd itself, also known as Route 29, would become more pedestrian oriented, with street trees, wider sidewalks and some bike infrastructure. Two vehicle lanes would be maintained in each direction, but often without the center median. Where bike lanes or a shared use path are not possible, the plan calls for parallel bike routes, including along 22nd and 26th streets.

“The vision for Langston Boulevard is corridor-wide and is based on the community’s desire to transform the corridor into a resilient, renewable, and re-energized place by 2050,” the plan says. “The Preliminary Concept Plan is informed by the community’s aspirations and priorities and the unique characteristics, challenges, and opportunities for achieving the vision in each of the neighborhood areas.”

The plan is divided into five zones, with some areas, like along Langston Blvd in Lyon Village, seeing just a partial block of upzoning with a maximum of 3-5 stories of development, tapering down to the single-family neighborhood. Other areas are slated for taller heights, including just across the road from Lyon Park, where a series of buildings up to 15 stories high may be built along I-66 and the Custis Trail.

The plan says the ultimate goals include a greater supply of various housing types, preservation of iconic local businesses while supporting greater economic vitality, and “safe and equitable access for all users, including pedestrians, bicyclists, transit riders, and motorists.”

More housing, particularly more moderately-priced housing, is a key feature of the plan. Langston Blvd currently runs along some of the county’s most expensive neighborhoods with the least amount of affordable housing.

“In an area that currently has only 8% affordable units, the lowest percentage countywide of households earning up to 60% AMI, and higher single-home values than the County average, there will be new opportunities and benefits for low and moderate-income households, people who want to age in place, and those who rely on public transportation,” the plan says.

The plan has, unsurprisingly, attracted pushback from some local residents.

Arlingtonians for our Sustainable Future, a group often critical of development and upzoning in Arlington — including the current missing middle housing study, which is running parallel to the Langston Blvd effort — is among the critics.

Group founder Peter Rousselot told ARLnow that it is too early to provide specific feedback about the new concept plan, which was released last week, but repeated previous concerns from earlier in the planning process.

“Serious defects include excessive reliance on developers providing the financing for critical flood mitigation projects in exchange for excessive density… Lack of demonstrated feasibility to achieve traffic assumptions and lack of quantifying the cost of doing so… Analysis of the amount of population increases and the impacts of same… [and t]he location of needed new school seats, in which schools, at what costs to the APS operating and capital budgets,” he wrote.

“ASF looks forward to the publication of an extensive schedule throughout the Fall and Winter to give the affected communities ample opportunities to review the new preliminary concept plan and its impacts,” Rousselot said.

Nicole Merlene, a former candidate for elected office in Arlington, had a different criticism, noting a lack of changes around the East Falls Church Metro station, on the western end of the plan area.

One of the few areas along Langston Blvd that are within a 10 minute walk of Metrorail, East Falls Church is slated to stay largely as currently planned, which includes single-family homes just steps from the Metro station.

This relates to my position on MM. The ownership and rental markets are different. If we want more units we should upzone EFC. This will do more than all of MM. If we want to increase ownership we need to do more to target ownership formations in MM since it decreases that supply

An online feedback form has also been posted.