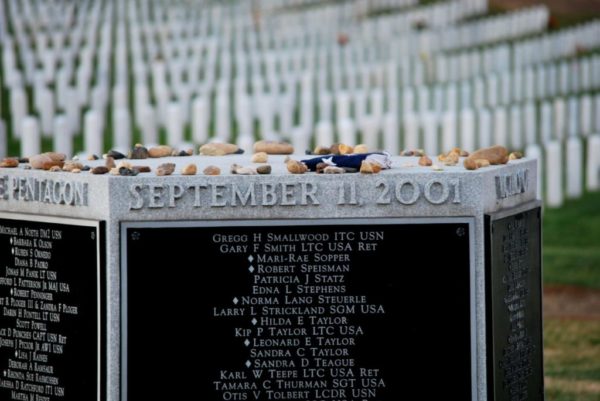 Remembering 9/11 — Sens. Mark Warner and Tim Kaine are planning to attend Arlington County’s Sept. 11 remembrance ceremony in Courthouse this morning. The event will feature a moment of silence at 9:37 a.m. The county’s emergency management agency, meanwhile, this morning posted audio of police radio traffic from immediately after American Airlines Flight 77 struck the west wall of the Pentagon. [Twitter]

Would HQ2 Be Good for Arlington? — Amazon could be an economic boon, or a gentrification disaster for lower-income renters — or both. Washingtonian asked a number of people, including Arlington Economic Development Director Victor Hoskins and former Arlington County Board candidate Melissa Bondi — who currently works in affordable housing policy — to weigh in. [Washingtonian]

Isabella Talks About Bankruptcy — Celebrity chef and restaurateur Mike Isabella says “bad press” — in other words, the “extraordinary” sexual harassment he and his executives are accused of — caused customers to stay away from his restaurants in droves, decimating revenue and sending his company into bankruptcy. Isabella’s trio of Ballston restaurants — Kapnos Taverna, Pepita and Yona — remain open but their long-term fate is unclear. [Washington Post]

Student Population Still Rising — “It won’t be official until the end of the month, but Arlington Public Schools is on track for another all-time high in student enrollment. School officials counted 27,522 students in seats when the school year began Sept. 4. While that is lower than a projection of 28,022 made in the spring, it represents a 2.2-percent increase from the first day of school a year ago.” [InsideNova]

What resulted were two seasons of the challenge, featuring Car-Free Todd, Matt, Ross and Kyle; a blog; and a sketch-comedy show that appeared on YouTube and local cable TV. The goal: convince skeptical commuters of the virtues of biking, walking or taking the bus instead of driving.

The show might have been silly — and intentionally so — but it did have a certain je ne sais quoi. In all, the Car-Free Diet Challenge was creative and memorable enough to warrant a mention eight years later.

And it might have had some lasting impact. After all, last year’s Bike to Work Day in Arlington set a new registration record, with 2,900 people signed up.

So what are the Car-Free Diet Challenge contestants up to these days? We received updates on three of the four.

According to a county spokeswoman, Ross moved to Boston to attend graduate school and Todd moved to Reston. Matt, meanwhile, is “working for Tysons Partnership doing Transportation Demand Management… [helping] those in the Tysons area to be car-free or car-lite.”

There’s no word on whether any of the contestants remained car-free.

Vornado Scraps Development Proposals — Ahead of the closing of its merger with JBG, Vornado has indefinitely put on hold a number of development proposals, including: all but one building of its proposed RiverHouse development in Pentagon City; a revamp of the shops at 1750 Crystal Drive that was to include a new 12-screen multiplex; and a pair of retail pavilions at 2101 and 2201 Crystal Drive. [Washington Business Journal]

Arlington a ‘Best City’ to Go Car-Free — According to a new list in Forbes, Arlington County is one of the top 25 U.S. cities for one to live without a car. Arlington was also one of nine places whose walkable neighborhoods were profiled in the magazine. [Forbes]

Video of Apartment Fire — The weekend fire at the Serrano apartments on Columbia Pike was caught on video. The dramatic video shows firefighters arriving and starting to douse the flames with water. [Statter 911]

‘Star’ Renewed for Second Season — Fox has renewed ‘Star’ for a second season. One of the stars of the series is Washington-Lee High School grad Brittany O’Grady. [Deadline Hollywood]

‘Taming of the Shrew’ Review — A review of Synetic Theater’s new production of Taming of the Shrew says the physical theater performance “speaks colorful volumes” despite the lack of dialogue. [Broadway World]

The new song, titled “Options for Days,” highlights the different options Arlingtonians have to travel around the county without a car, including taking the Metro, walking, biking and riding the bus. Throughout the video, performers clad in tee shirts and sunglasses dance, rap and sing to promote the transit initiative.

This isn’t the first quirky video the County has released to help highlight the initiative. Officials released a “Car-Free Diet Show” sketch comedy series almost five years ago and have posted videos regularly on YouTube since 2009. 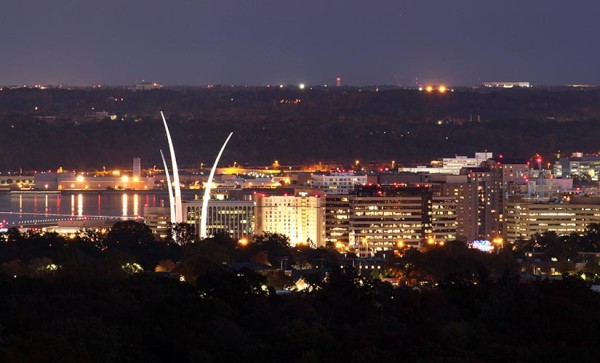 Rosslyn Planning Meeting — The county will share “preliminary Concept Plan Alternatives” as part of its Western Rosslyn Area Planning Study at a public workshop on Saturday. The study is, among other things, considering redevelopment possibilities for the Wilson School and Fire Station No. 10 property on Wilson Blvd. [Arlington County]

Glen Campbell Movie Screening in Ballston — A special screening of the Glen Campbell documentary I’ll Be Me will be held at the Regal Cinema in Ballston (671 N. Glebe Road) on Saturday. The documentary explores the music legend’s battle with Alzheimer’s disease. [Volunteers of America]

Tips for Car-Free Living in Arlington — Arlington’s transportation blog has seven tips for living car-free in Arlington. Tips include shopping at local stores, downloading the right transportation-related smartphone apps and borrowing a car when you need one. [Arlington County] 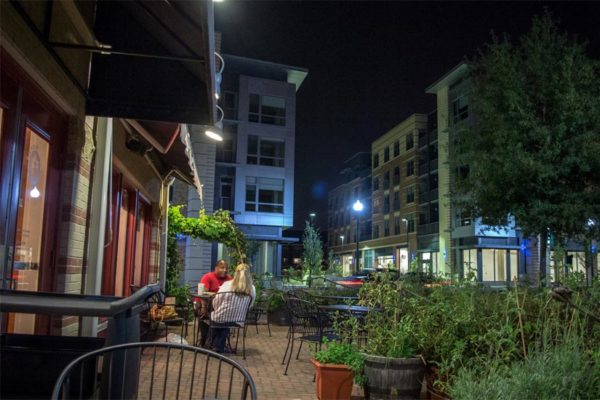 Mental Evaluation for Fire Bomb Suspect — Lawyers for Leon Traille, Jr., the man accused of trying to fire bomb the Ballston Common Mall food court last week, have asked the federal judge in the case to grant a mental health evaluation. Traille is charged with arson and faces 5 to 20 years in prison if convicted. [Washington Post]

Disturbance at Arlington Screening of ‘Hating Breitbart’ — A liberal activist is accused of disrupting the Friday night showing of the documentary Hating Breitbart at the Regal theater at Ballston Common Mall. Moviegoers say the activist, Ryan Clayton, shouted at the screen and laughed loudly at inappropriate times during the film about the late conservative media icon. [The Hollywood Reporter]

New ‘Car Free Diet’ Video — Arlington County Commuter Services has commissioned a new series of videos for its ‘Car Free Diet’ campaign. The theme of the videos is “What’s Your One?” — and they make the case for walking, biking or taking public transit instead of driving. The videos will play on Arlington TV, the county’s cable channel, and prior to movie previews a the Regal Ballston Common and the AMC Loews Shirlington theaters. Disclosure: ACCS is an ARLnow.com advertiser. [YouTube] 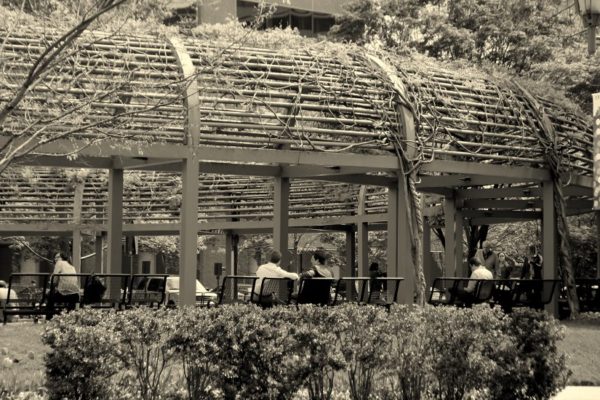 Sixteen Interested in School Board Seat — A total of 16 people have filed statements of interest for the School Board seat vacated by now-County Board member Libby Garvey. Among those seeking the nine month appointment are former state Senate candidate Jaime Areizaga-Soto. [Sun Gazette]

Yorktown Student Wins Optimist Essay Contest — Alina Kramer, a senior at Yorktown High School, has won the Capital/Virginia District Optimist Essay contest. Kramer will receive a $2,500 scholarship for her essay, which was based on the theme of “How My Positive Outlook Benefits the Community.” It was the first time in more than 10 years that a student from the Arlington Optimist Club won the essay contest. 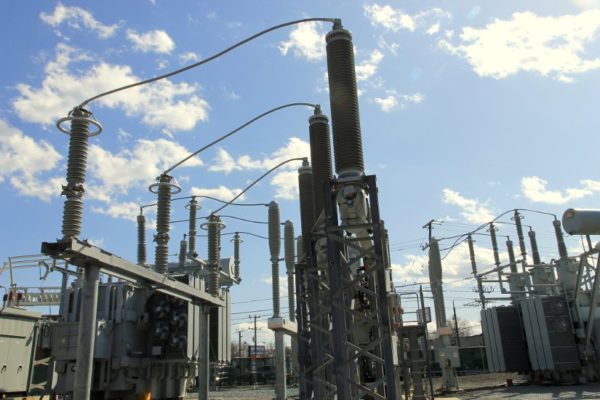 New Long-Haul Flights Coming to DCA — Three new long-haul flights to western cities are being added at Reagan National Airport. A new United flight to San Francisco will start in May, and flights to Salt Lake City and Los Angeles will  start in June. While travelers may be happy about the new nonstop options, some Arlington residents are concerned about the potential for added noise from the larger planes necessary for the long-haul flights. [Sun Gazette, Washington Business Journal]

Metro Track Work This Week — Metro is working on the Blue Line this week, and those who travel between the District and Arlington around midday may experience some delays as a result. Metro is single-tracking between Foggy Bottom and Arlington Cemetery from 10:00 a.m. to 2:00 p.m. each day through Friday. Crews are performing “rail, fastener, tie and insulator renewal.” Riders should add an extra 10 minutes to their travel time, according to Metro. Orange Line passengers may also experience brief delays as a result of the Blue Line work. [WMATA]

Pricey Rehab Options for Reeves Farm — The historic Reeves Farm, located near Bluemont Park, is in need of rehabilitation. According to a new report, it will cost between $1.1 and $1.3 million to convert the Reeves farmhouse to a learning center or demonstration kitchen. [Arlington Mercury]

Retailers Helping Arlington’s Car-Free Diet — The Arlington County Commuter Services Bureau has partnered with 327 local retailers to help promote its Car-Free Diet campaign. You can find a map and a list of specific options for getting to each retailer without a car on the Car-Free Diet web site. [TBD]

A second episode of Arlington’s “Car-Free Diet Show” has been released.

Billed as the “#1 rated… sketch comedy show devoted to the Car-Free Diet in all of Arlington,” the show stars “Car-Free Matt,” the winner of last year’s second-annual Car-Free Diet Skeptics Challenge. Also appearing on the show are the remaining three Car-Free contestants from the past two years — Kyle, Todd and Ross — and Car-Free Matt’s girlfriend, Dana.

The show features amusing segments intended to convince skeptical commuters of the virtues of biking, walking or taking the bus instead of driving. By convincing residents to ditch their cars, ACCS (which receives most of its funding from federal and state grants) is hoping to alleviate some of the area’s traffic congestion and vehicle exhaust pollution.

Episode 1 of the Car-Free Diet Show can be seen above or on the show’s web site.