The Arlington County Board is set to vote this weekend on a $1.4 million construction contract for improvements to N. Pershing Drive.

The project calls for “Complete Streets” safety upgrades at four intersections — three in Lyon Park, near the Lyon Park Community Center, and one in Ashton Heights.

“The project will install curb extensions, bus stop improvements, ADA compliant sidewalks and curb ramps, high-visibility crosswalks and a signal upgrade at the intersection of North Fillmore Street,” a county staff report says. “The project also proposes a bioretention system at the intersection of North Pershing Drive and North Oakland Street. Bioretention is one of the County’s tools to mitigate the water quality impacts from existing development.”

The work is intended to improve safety for all users of the moderately section of busy road, between Washington Blvd and N. Glebe Road.

“Pershing Drive is categorized as an urban minor arterial and serves thousands of automobile trips each day,” the county said on its website. “Pershing Drive also supports bus service (ART & WMATA) and many bicyclists and pedestrians.”

County staff note that the project will not include any flood mitigation efforts:

County staff have reviewed the project location from the perspective of flood risk and found that the project area does not currently experience significant flooding. This area is not identified as a priority location for installing storm infrastructure to reduce the likelihood of flooding, and as a result, storm sewer upgrades are not included in this project.

The four intersections set for construction in late 2020, after the contract is approved, are:

Arlington County has been working to obtain easements from property owners to facilitate the upgraded sidewalks and other project features. That work is now complete, though the county was not able to obtain easements for upgrades at N. Oxford Street, which was to be the fifth intersection but was subsequently removed from the project.

(Updated at 2:44 p.m.) The county could soon take a step forward in its plan for road improvements along N. Pershing Drive, pending Board approval.

The Arlington County Board will review requests for several easements at an intersection in the Lyon Park neighborhood as part of the county’s N. Pershing Drive Street Improvements Project, which aims to add bike shadows and more safety measures for pedestrians along the road.

The easements are centered around the tricky intersection of N. Pershing Drive, 5th Street N., and N. Garfield Street. The county will use the easements to extend curbs, add grass along curbs and in a median, paint two new additional crosswalks in the intersection, and add a bus stop, according to a copy of its plans online.

The county began discussing the Pershing Drive project with neighbors in Lyon Park in 2016, per a recent staff report to the Board, and began piloting the program in October 2018.

Now the County Board is set to vote on approving the purchase of several easements that would allow the county to install sidewalks and curbs during the Board meeting this Saturday, July 13.

The three sets of easements are for roadside properties at:

Arlington is offering to pay $23,000 for the two easements at the private Lyon Park Community Center (420 N. Fillmore Street), which will allow work on the sidewalk, curb, gutter, traffic signal, and utilities. The amount is based on the property’s deed value and the 800 square feet of space that the county will use.

The county is also seeking to pay homeowners on the corner of N. Garfield Street and Pershing Drive $7,300 for an 82 square foot easement on the curbside of their property.

Arlington is offering a third set of homeowners on the corner of Pershing and 5th Street N. $1,218 for 21 square foot area of their property.

Staff noted the payments to homeowners were “discounted” because “the interest sought is a sidewalk and utilities easement, and not a fee interest.”

The roadwork is located just blocks away another planned project at the Henry Clay Park where officials hope to add new swings, benches, and trees.

A crash at the intersection of N. Pershing Drive and Route 50 is causing significant backups.

The crash was reported around 5:45 p.m. As of 6 p.m., all westbound lanes of Route 50 (Arlington Blvd) were blocked and traffic was backing up past Courthouse.

So far there have been no reports of serious injuries.

Arlington County is working on some modest improvements to the Arlington Boulevard Trail in Lyon Park, renewing hopes among cycling advocates that the trail will someday provide a fully contiguous alternative to Route 50.

The county is currently planning a series of changes on the trail as it runs near Arlington Boulevard’s intersection with N. Pershing Drive, near the Day’s Inn hotel in the area. Arlington’s Department of Environmental Services says it hopes to complete the following alterations sometime this fall:

The county envisions the new curb ramp connecting the trail to the new on-street trail along Wainwright Road, which will then connect to the rest of Arlington Boulevard trail running past the Washington and Lee Apartments.

The cycling advocacy blog WashCycle noted that these changes come a few months after Washington Gas replaced a pipeline in the area, leading to the repaving of the trail and the removal of some bollards nearby.

The blog hailed these latest proposed changes, noting that the trail is currently “discontinuous and below standard” and referred back to the Washington Area Bicyclist Association’s proposal to someday add three miles worth of trail along Arlington Boulevard as evidence of the trail’s potential for growth.

“The boulevard trails, like the ABT, MacArthur Boulevard Trail and the planned or under-construction South Capital and Washington Boulevard Trails, don’t get quite the coverage that the rail or stream trails get; but they’re [arguably] more important for transportation as they go right through the areas where people live and work,” WashCycle wrote. “The ABT has a long history and, as WABA points out, plenty of potential. It can, or already does, connect to eight trails including Rock Creek, Mt Vernon, W&OD and Cross County. As proposed by WABA, it could be a real backbone for Arlington County biking. It would be great to see this once again become a must-see trail.”

Arlington is gearing up to test some protected bike lanes and pedestrian safety features along a heavily trafficked stretch of N. Pershing Drive in Lyon Park.

The county plans to install the new “safety and accessibility improvements” on the road between Washington Blvd and N. Barton Street in the coming weeks, as part of some previously scheduled summer paving work in the area. Mainly, the construction will focus on adding protected bike lanes alongside some new landscaping designed to better separate cars from pedestrians.

Transportation planners have been studying the road for potential improvements since last summer, over concerns that Pershing can be challenging for cyclists and pedestrians alike along the road as it leads up to Route 50. While the county hopes to eventually make the changes permanent, Arlington’s gloomy financial picture means that officials will merely be testing out the new features over the next few years as “a cost-effective opportunity to implement improvements early,” according to the county’s website.

Workers also plan to relocate the Capital Bikeshare station in the area once the paving work gets going. The station currently sits along 7th Street N., but the county is planning to move it up the block a bit to where the road intersects with Washington Blvd, adjacent to a gas station in the area.

County transportation spokesman Eric Balliet says that work will likely start sometime in September, noting “we don’t have an exact timeframe yet.”

Someday, the county plans to add pedestrian safety and bus stop accessibility improvements at intersections all along Pershing as it runs to meet N. Glebe Road. However, those projects are on hold until the county can come up with a bit more funding.

The Spring Mill Bread Company is expected to open its doors on Pershing Drive on Saturday.

The bakery’s owner tells ARLnow.com that final preparations are underway and the aroma of freshly-baked bread should begin wafting from the 2209 N. Pershing Drive location in Lyon Park tomorrow.

Spring Mill sells fresh-baked breads, baked treats and soups and sandwiches, in addition to coffee and sodas. It has existing locations on Capitol Hill, in suburban Maryland and in Pennsylvania.

Spring Mill joins a number of existing businesses on the block, including Paisano’s Pizza, Bonchon and Streets Market.

(Updated at 2:25 p.m.) Southbound Glebe Road was temporarily closed at N. Pershing Drive, just south of Ballston, due to a crash this afternoon.

An SUV broadsided another SUV in the intersection just before 1:30 p.m.

One person in the SUV that was struck was reported injured in the crash and was transported to the hospital via ambulance. The injuries are not reported to be life-threatening.

Glebe Road has since reopened. Absorbent material can be seen in the middle of the intersection, placed there to sop up fluids that leaked as a result of the crash. 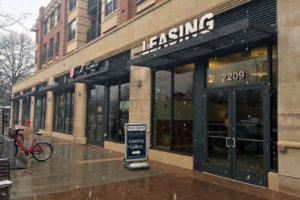 Spring Mill Bread has locations on Capitol Hill and in Bethesda and Gaithersburg. It’s in discussions to move into a vacant retail space at 2209 Pershing Drive, ARLnow.com has learned.

The leasing documents have not been signed, we’re told, but the property owner, Equity Residential, has filed for building permits with the county in anticipation of a deal getting done.

If Spring Mill Bread signs on the dotted line, Pershing Drive would be in line for a shop that sells fresh-baked breads, baked treats and soups and sandwiches, in addition to coffee and sodas.

The baker would join Paisano’s Pizza, Bonchon and Streets Market among the retail options on Pershing Drive between Route 50 and N. Cleveland Street.

The boutique grocery opened Friday at 2201 N. Pershing Dr. Though the store is small, “this is not a bodega,” said company vice president Campbell Burns.

The store carries beer, wine, toiletries, produce, sandwiches and sushi, which is made fresh every morning at the company’s D.C. outpost on 14th Street NW. (The Pershing Drive location is Streets Market’s second.)

“It’s a full-on Whole Foods in 3,000 square feet, minus the kitchen,” Burns said. “It’s all geared toward the surrounding community. We’re flexible. If consumers prefer a different brand or more variety of a product, we can adjust as needed.”

Burns said the company was thrilled to be in Arlington is already thinking about expanding.

“We’re excited about the market and the neighborhood,” he said. “We think our concept is going to be well-received.”

They were called to 218 N. Glebe Road, where furniture placed next to a dumpster had caught fire around 8:15 p.m. An ACFD spokesperson says it took longer than usual for responders to get to the scene because they initially received the wrong address.

Firefighters easily extinguished the flames once they arrived on scene. Nobody was hurt.

The fire marshal is investigating the incident to determine if the fire was an accident or if it was set intentionally.

BonChon Chicken Coming to Arlington — BonChon Chicken, a popular Korean-based chicken chain, will be coming to the ground floor of the new 2201 Pershing apartment building. The restaurant, noted for its wings, expects to open in the summer of 2013. [Washingtonian]

Galaxy Hut Goes Vegetarian — Galaxy Hut has introduced a new menu and meat is nowhere to be seen. The revamped menu is all-vegetarian and includes seitan and vegetable-based cheesesteaks, burgers and barbecue sandwiches instead of the genuine article. Some meat-based meals are still available, but by request only. [Washington Post]

Wakefield Half-Way Finished — Construction of the new Wakefield High School has hit the half-way mark. The new $115 million high school is expected to open next summer in time for the 2013-2014 school year. [Sun Gazette]

Church Prepares Meals for the Hungry — Instead of a traditional Sunday service, members of Arlington-based Grace Community Church prepared nearly 100,000 meals for those in need. The church meets at Thomas Jefferson Middle School. [WUSA]