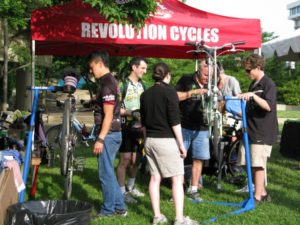 Arlington County has been investing heavily in marketing efforts that try to persuade people to ditch their cars and bike to work. But a car-free diet doesn’t just benefit the environment and ease traffic congestion — it also, in theory, steers money that would have otherwise been spent at service stations and car dealerships to bicycle stores.

There’s no way of knowing whether there is a correlation with the county’s pro-bike efforts, but according to a published report, local bike stores are doing quite well in a down economy.

Revolution Cycles, which now has two Arlington locations, is on pace to see a $1 million jump in sales this year, according to Bicycle Retailer and Industry News. Revolution’s flagship Clarendon store alone has seen sales increase by 60 percent in April and by more than 30 percent for the year.

A Revolution Cycles spokesperson did not respond to a request for comment.

At Spokes Etc., which has an Alexandria store near Fairlington, sales were up 6 percent last year and are up again this year, according to the publication.

In other local bike news, BRAIN is reporting that Conte’s, with its big, iconic store on Wilson Boulevard, is under new ownership and will soon be changing its name to ‘Freshbikes.’