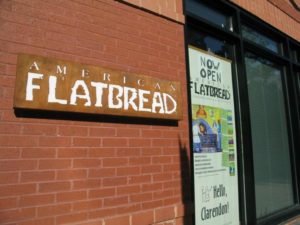 Saturday’s county board meeting will pit neighbor against neighbor in a battle over a small outdoor patio space.

In one corner are the supporters and management of American Flatbread, the wood-fired pizza restaurant that bills itself as a “community hearth” and is best known for its locally-sourced, organic ingredients. In the other corner are county planners and a majority of local homeowners (others support Flatbread), who don’t want the restaurant to open an outdoor patio on their relatively quiet section of North 11th Street in Clarendon.

At stake for neighbors is the tranquility of the neighborhood and, possibly, the area’s steep property values. At stake for Flatbread is its viability as a business in Clarendon.

Restaurant owner Scott Vasko, who also owns the popular American Flatbread location in Ashburn, has been trying to get county approval for since he signed the lease last year. He says he has tried to find a compromise with the two main sources of opposition, the Clarendon-Courthouse Civic Association and the homeowner’s association president for the townhouses across the street, to no avail.

Vasko says he has offered to close the patio at 9:00 p.m. on weekdays and 10:00 p.m. on weekends. He would limit the space to 24 seats and not allow larger parties to combine tables. He would pay to extend an adjacent wall and to erect a gate in front of the patio. And there would be no music. 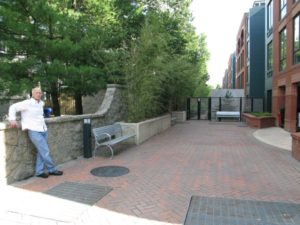 Civic association president Rich Dumas says the group wouldn’t have a problem with Flatbread and another restaurant in the same building, Screwtop Wine Bar, setting up sidewalk seating on the Fillmore Street. He also said that he personally wouldn’t mind the addition of seating that wraps around for 15 to 25 feet on 11th Street, which is one option the county board will be considering on Saturday.

Planning department staff will recommend the option that disallows patio seating but allows seating on Fillmore Street and 25 feet of 11th Street. That will provide outdoor seating for about four tables of two, a county planner told ARLnow.com

But Vasko says the patio seating was a major component of his business plan when he decided to come to Clarendon and without it, “we would honestly have to take a look at whether we could still be a viable entity.”

American Flatbread employs 24 people in Clarendon and pays nearly $40,000 in meals tax revenue to the county, he noted.

The few tables the restaurant would be able to set up on the sidewalk, Vasko said, would be helpful but, perhaps, too little too late. He says he was misled by the building owner, who reportedly recruited American Flatbread to be a tenant with the promise of an outdoor patio.

“We’re just trying to get what was originally offered to us by the building owner as an enticement to come in here,” he said.

American Flatbread has been recruiting its loyal customers to voice support for the restaurant. An online petition has garnered 369 signatures, and the restaurant plans to have supporters present at Saturday’s board meeting. But Vasko says his grassroots efforts received some unwelcome attention after ARLnow.com published parts of an emotion-filled email the restaurant sent to customers.

“I think it’s important for everyone to understand that the communication that was published was meant to be an internal publication,” he said. “I was not consulted before it went public, and really it was meant as a rallying cry for our supporters.” 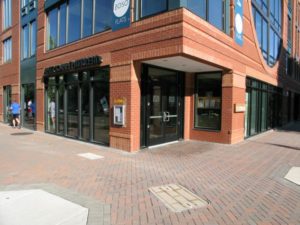 As a homeowner who lives near his own restaurant in Ashburn, Vasko says he is “extremely sensitive to the potential effects of a restaurant” and wants to be a good neighbor.

“We cater to a lot of families who like to ride bikes, bring their dog, and sit outside and have a nice experience,” he said. “We’re not about staying open late, not about loud noise, not about being a drinking place… If given the opportunity to show what kind of neighbor we can be, I think we can allay some of the fears.”

“I’m probably the best neighbor you can want to have, because I do care about what goes on in the neighborhood,” he continued, noting that since opening he has spent more time in Clarendon than at his home and his first restaurant combined. “I’m here every day, I’m not an absentee owner.”

“This is not about American Flatbread,” Dumas countered. He said that the original 2004 agreement between residents and developers of the Zoso Building, in which Flatbread resides, specifically called for proposed patio seating area to be a vegetation-filled “buffer zone.”

While acknowledging that the proffer — the tit-for-tat legal agreement that allowed the Zoso building to be built — does not specifically address the issue of outdoor seating, Dumas said it would be bad precendent for neighbors to allow the de facto development agreement on the buffer zone to be pushed to the wayside.

“I think the bigger issue is the precedent it would set for all civic associations,” he said.

Before signing the lease, Vasko said his attorney did due diligence on the property and did not find any impediment to outdoor seating.

Had he known of the buffer zone agreement? “I wouldn’t have signed.”

END_OF_DOCUMENT_TOKEN_TO_BE_REPLACED

More Stories
Widespread Power Outage in North ArlingtonOn This Day, We Were Given Representation in Congress